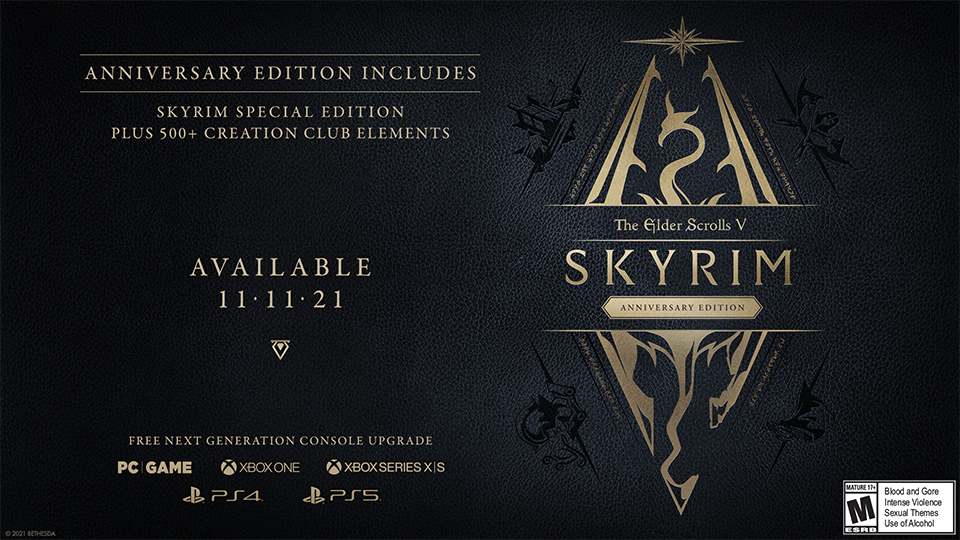 Well looks like Bethesda is going to do it again. What is that? Release another version of Elder Scrolls V: Skyrim. This time they are going to coincide with the 10th anniversary of the original game. Excuse me while I go cry in the corner because I had no idea it had been 10 YEARS since it was released.

The Elder Scrolls V: Skyrim Anniversary Edition will release on 11/11/2021 and looks to be coming to all major platforms except for Switch (sorry Nintendo fans).

What is in the Anniversary Edition? Well looks like the base game plus all DLC and 500 items and mods from the Content Creators Club.

I know the Content Creators Club content is unique and can extend the game with new quests and items but cmon man. Maybe I will be shocked at what this means. But I really hope they have something in there to make this worthwhile. Technically if you knew what the 500 items were you could install all the mods today and play this now.

The good news is if you are a Game Pass subscriber you should get this for free. And they mentioned if you already own The Elder Scrolls V: Skyrim Special Edition you will also get this for free. This is good news as this is really a free upgrade for a vast majority of players.

I guess another good thing about this is it will give you another reason to fire up this wonderful game. And maybe fill the gap for another year to make us forget that Elder Scrolls 6 is so far away.

I don’t know. Maybe I would just rather take an arrow to the knee.