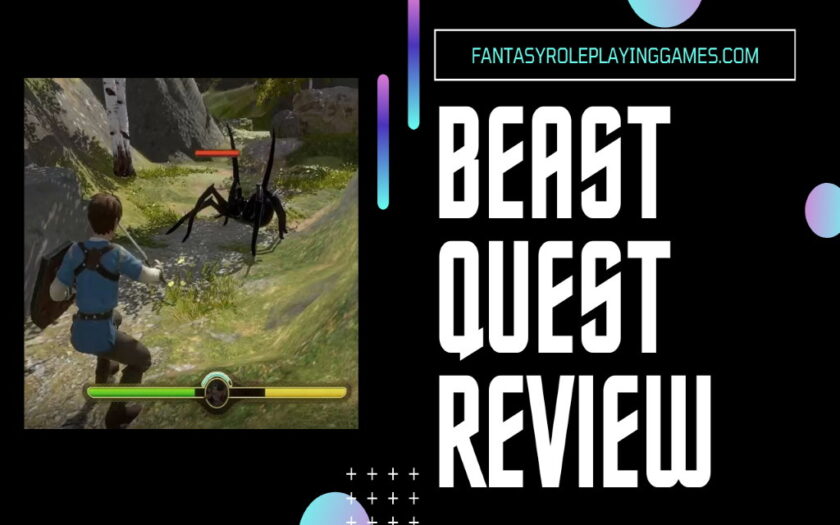 I recently saw a game on an Xbox sale that caught my eye. The game was Beast Quest and it was on sale for $1.99 so I figured I would give it a shot.

Beast Quest is based on books that share the same name. There are over 100 books written so they have a wealth of lore to explore and use in the game. The only problem I have is that after playing this game you may be turned off by the books.

Beast Quest is one of the most basic and bland games I have played in a while. Overall it uses some of the worst tropes in gaming and fantasy role-playing games and magnifies it to the next level.

The story starts out with what seems like some decent dialogue about a rogue wizard. This wizard has corrupted some beasts in Avantia. Other than this there isn’t much story in the game. The rest of the stories and side quests you receive are generic help this person or find this item or defeat this enemy.

The story had so much potential because of the books it could have used to drive content from. But again there just wasn’t much there. I think part of this issue was they tried targeting everyone and the focus should have been on kids who have read the books.

The story never veers from the original goal. There is no plot twist or some strange side quest that changes the story. It is straight-up what you see at the beginning. And there is no real back story to be had other than what is given in the intro scenes.

The gameplay mechanics are pretty standard. It is a third-person role-playing game and the world is somewhat open. You have your standard mini-map and you have an overworld map but there is something missing in between to help you see where you need to go.

Your character cannot swim. There is water everywhere and if you fall into the water it means death. Now when you die you spawn back at your last checkpoint so you didn’t lose too much progress.

Campfires are set as checkpoints and save locations. When you hit a campfire you can fast travel between locations which made turning in quests an easier task. Hitting a new checkpoint also refills your health and magic bar.

There are chests everywhere that you have to find a matching key to open. The mini-map will let you know when you are close to a key but the mini-map always seems off a bit and makes it hard to find the key. And it seems all the chests contain mostly the same rewards. The only exception was some higher-level chests may give a unique wearable item.

When wandering around you will see enemies just standing there doing nothing. You can completely walk around them in some places and never even encounter them. When you do encounter them it goes into a weird battle sequence.

In the battle sequence, you have to look at enemy cues to see which enemy is attacking and what direction they are attacking. Then you can dodge left or right or block and then parry. This whole system just feels weird and clunky.

You can execute special attacks and at some point, you can call in reinforcement to do special attacks that are on a timer. But the combat is very basic and outright annoying.

The enemies you face in Beast Quest are also quite repetitive and standard for a fantasy RPG. Wolves, dragons, birds, bandits are all pretty normal for this type of game.

Fighting the bigger bosses is more like quick-time events of clicking the right button at the right time than actually battling anything.

The graphics are really dated. Even my 10-year-old son came in and asked if I was playing an Xbox original game. If you are looking for a great looking game then move on from this one.

Also, the movement of your character is downright terrible. When you jump it looks like you are trying to fly and when you go up a hill it looks more like floating up the hill than jumping.

The cutscenes are a little off. While they are not horrible to the eye the tone of the characters didn’t seem to match and just made it feel weird.

Almost all of the quests seem to be fetch quests. There are few “find this person” but it seems once you find them it is just another fetch quest.

They try to put a few puzzles in the game where you have to move a rock around to get it in the right place. But even that was really basic.

The dialogue of your character can get really annoying really quick. Repeats the same canned phrases over and over when opening a chest or taking damage.

The leveling system was pretty basic also. You gain AP points to level up powers and they all seemed to do the same function and didn’t add much improvement to your character.

I think the main goal of this game was to try and appeal to kids. But I think it missed its mark by trying to appeal to all ages. If they would have stuck to making it turn-based combat and focused on a really good story from the books it might have turned out better.

Overall I would give this a 3/10. It is a family-friendly game and maybe if you have some younger kids you want to introduce to role-playing games or if they read the books maybe this is a good one to give a try. But any age over 9 or 10 and they will get bored with this pretty quick.