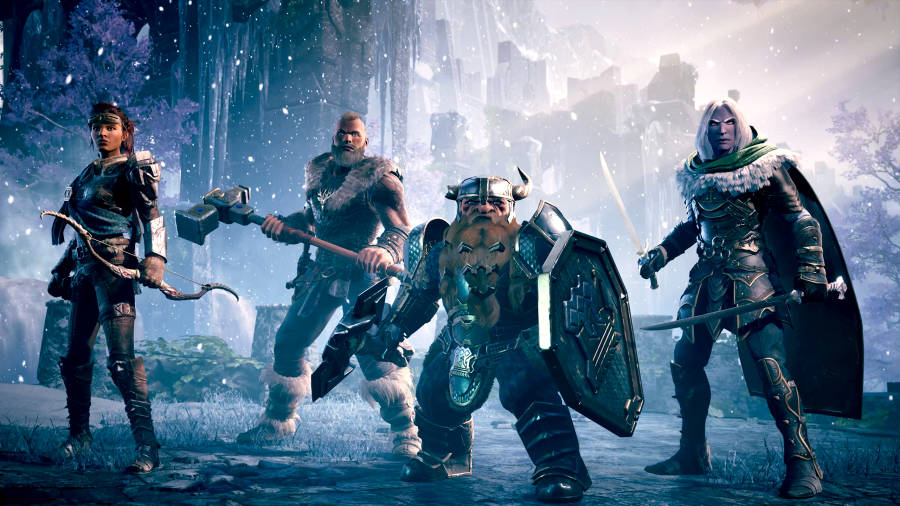 Dungeons & Dragons Dark Alliance was recently released and I got to sit down and play the game for a little while. I would like to offer some of my first impressions of what I am seeing.

First I want to mention that I am playing this on Microsoft Game Pass Ultimate on an Xbox One S.

One of the things I noticed right away is how slow the loading is on an Xbox One S. This might be improved if I was playing on an Xbox Series X or Xbox Series S. But right now the load times are fairly slow. And just to start the game is brutally slow. I laugh because it reminds me of the Borderlands 3 claptrap dance. Borderlands 3 may have long load times but at least they try to entertain you.

The game’s intro is short and to the point. The story seems to be heavily influenced by Lord of the Rings as there are some striking similarities. And the character models and classes look like they were pulled straight from the novels. But this kind of thing happens often as they all drive from the same storytelling influences.

Not much to the character selection. Doesn’t seem to be any customization and you just pick a predefined character class. I would expect a little customization from a game with Dungeons & Dragons attached to it, but this one doesn’t really provide anything at this point.

Plenty of settings to be found. I clicked through to adjust my safe zone and saw a myriad of settings and customizations here. If you need to adjust any setting it seems to be there.

The game starts you out in a camp. And in this camp, your map unlocks zones. This setup reminds me a little of Greedfall but it seems even less open world. One of the first zones you get unlocked is a tutorial arena.

You get to learn different moves during your objectives and learn the basics.  It does a serviceable job of teaching you the different combos and techniques used to fight enemies.

After getting my bearings straight and going through the tutorial I gave the first level a shot. The cinematic intro offers a little more into the story. Then you pop in and start fighting baddies.

The variety of enemies was surprising. Although I would say the AI is lacking and pretty much stand around and wait for you to attack. The larger enemies use brute strength and ranged weapons to provide a little more challenge.

There is some destructible environment that you can use to your advantage. Some exploding barrels can help damage a large group of enemies if you time it right. Also, there are items to destroy to reveal more loot or open new sections.

There is a lot of loot. Enemies often protect chests and there are sections of the map that can kill you if you do not “warm” up. In these sections, there is hidden gold, items, and chests to access. Sometimes I found it hard to see the lootable items on the ground. The enemies rarely dropped loot. The larger enemies were a better source of loot.

This is a big knock for me. You have to “rest” to get to a checkpoint. But in order to save progress and keep the loot, you collected you have to complete the level. I’m not real happy with this because unless you really have time to sit down and play the game for a long time you won’t be able to clear large sections.

I am a dad and a busy person so my gaming sessions are usually limited and can be interrupted at any time. So no autosaving or option to save when I “rest” to save level progress is a big reason to not play this game.

I am still trying to figure out the gameplay so this may get updated as I get used to the controls. Right now it feels a bit clunky but I think the strategy is to lock onto enemies and then attack. If you don’t lock onto enemies your character will just keep going straight ahead and be left open for attacks.

The parrying system seems like it is useful but I still have not mastered the block and the parry. Mostly because the enemies just seem to stand around and not do much attacking. And when that happens I charge in and start tanking everything that moves.

My biggest complaints so far in Dungeons & Dragons Dark Alliance

The AI is really just strange. But for the most part, they just stand around until you get into range. Unless they have a really good ranged attack you can sit back and use your own ranged attack to knock down their health.

As I said earlier. I am a dad and I work full time. I love games that use autosave features and give you the option to save at any time. Mainly because at any time I need to stop gaming to take care of a kid or just go to bed because I typically game at night.

If this was my game I would give you the option to save when you rest. Maybe you have to spend some gold or give up something else to save and exit. But to make players lose all progress during a level is a hard pill to swallow.

They have a lot of loot and variation of that loot in this game. But you don’t get to unlock and use this loot until after you complete the level. How much better would it be if you could unlock that rare or legendary item right before you battle a boss.

So far I like the game. It seems like there are some areas that require some finesse and some you can just brute hack your way through. The bosses seem to require a bit of strategy as I haven’t been able to tank any one of those yet. If I do I run out of health potions quickly

Have you played Dungeons & Dragons Dark Alliance yet? If so let us know in the comments or let us know on Twitter.

Dungeons & Dragons Dark Alliance is owned by Wizards of the Coast and developed by Tuque Games. All rights reserved.