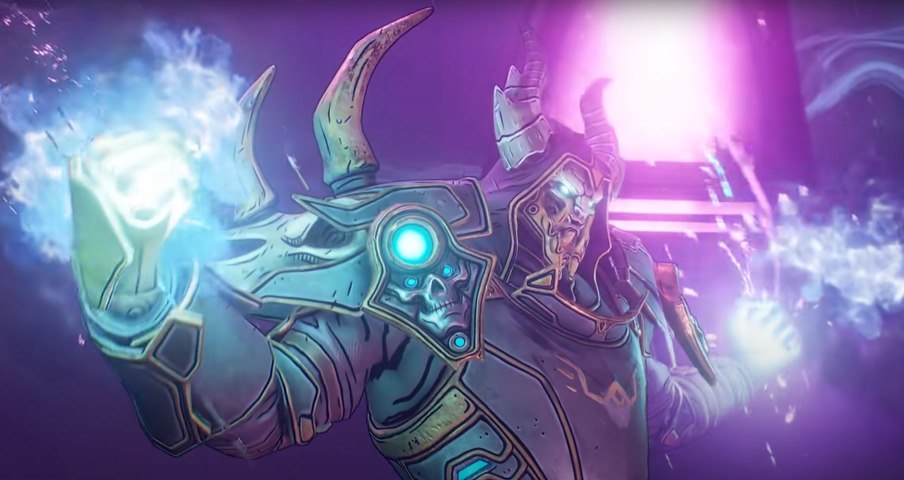 Tiny Tina’s Wonderlands has officially dropped the first Gameplay trailer. And it looks nuts. As expected it looks like the game will be using the same engine as Borderlands 3 so there will be a lot of similar gameplay involved. Here is a breakdown of what we know so far about the game and what the trailer revealed.

What’s the story about?

We don’t know too much about the exact details of the story. The trailer has Tiny Tina narrating a Bunkers and Badass campaign and she mentions the Dragon Lord has returned. We also get a brief glimpse of the Dragon Lord in the trailer.

Paying close attention to the trailer doesn’t give many details more than your traditional fantasy RPG would be. Fight some enemies, wield some magic, get some loot (lute?), and guns.

Who are the adventurers?

Will there be magic in Tiny Tina’s Wonderlands?

Yes, the trailer focuses a lot on some new magical abilities that the players will have. There are some very cool abilities that look almost siren-like that are displayed. You will see a player turn a monster into ice and in another scene you see the player cause some sort of fire seismic charge to come out of the ground.

Will the magic be based on weapons or will they be a skill tree? See below as I break down what I am guessing will be the way skill trees work in this game. But yes I could see it is based on both what I am seeing and the way the current game works.

Will there be melee weapons in Tiny Tina’s Wonderlands?

Yes, the trailer also shows some pretty impressive melee weapons and moves that you would see in a traditional RPG hack and slash game. I never found melee to be a viable option in most Borderlands games. But the trailer gives me hope that they will focus on some melee-based combat.

Will there be guns in Tiny Tina’s Wonderlands?

Of course, it wouldn’t be a Borderlands-based game without guns. And Tiny Tina says shut your face and just shoot some bad guys. I imagine guns will be important but maybe a secondary thought to how you will play the game.

Who are the NPCs in Tiny Tina’s Wonderlands?

The trailer showed a few familiar faces. Tiny Tina is there of course and her bestie Butt Stallion makes an appearance. Also, you will notice that Mister Torque appears playing the lute while seeing a ton of loot.

Also if you pay close attention Tiny Tina has an Ellie’s garage poster and a Typhon Deleon poster up in the room where they are playing. Could those two make guest appearances in the game?

I don’t see too many showings of other NPCs from Borderlands 3 but they may make an appearance. I really hope so as that ties it in all nicely.

When does Tiny Tina’s Wonderlands release?

They are still sticking to the March 25th, 2022 release date. I have my worries but this tells me they have been working on this for a while. I will be really happy if they can stick to that date.

What platforms will Tiny Tina’s Wonderlands release on?

Will Tiny Tina’s Wonderlands have DLC?

Yes, they are already taking preorders for different levels and packs. One of those includes a season pass. Looks like they already have a plan to add DLC to a game that was based on DLC. Click here for more details.

This is total speculation and I could be horribly wrong. But my guess is this to how the skill trees might work. In your typical Bordlands game, each class has 3 skill trees. They each have a different focus on how you want to play your character. This is how I think Tiny Tina’s Wonderlands will address this to make it fit a more traditional RPG style.

I think there will be a tree to highlight melee abilities. The more you invest the more your character will specialize into being a melee tank.

I think there will be a tree to highlight magical abilities. The more you invest the more magic your character can wield.

And the last one may be either might or maybe a healer skill tree. The might skill tree may focus more on using guns and giving you more abilities when using them.

But once again I could be totally wrong on this and they will go in a completely opposite direction. As we get updates I will write up a new post on how wrong or right I was with this.

Other details I noticed

There looks to be some new overworld map that your characters will move around on. Maybe a mini version with a large head and that is how you will travel between areas. It looks humorous and kind of awesome at the same time.

One of the bosses looks like a huge Skeletor (He-Man) so it should be interesting to see what that bad guy’s name is.

If you pay close attention to the chest that drops all the loot. There are some interesting weapons. Not just your typical guns, shields, and grenade mods. But you see swords, axes, maces, and other typical RPG weaponry.

I am super excited about this game. I was disappointed in the direction that Season Pass 2 took for Borderlands 3. So much so I haven’t even purchased it because most of my friends told me not to bother. If it goes on sale I may eventually pick it up but for now, I will save my money for this game.

Are you excited about Tiny Tina’s Wonderlands and what they revealed? Let us know in the comments as to what was your favorite part about the trailer.