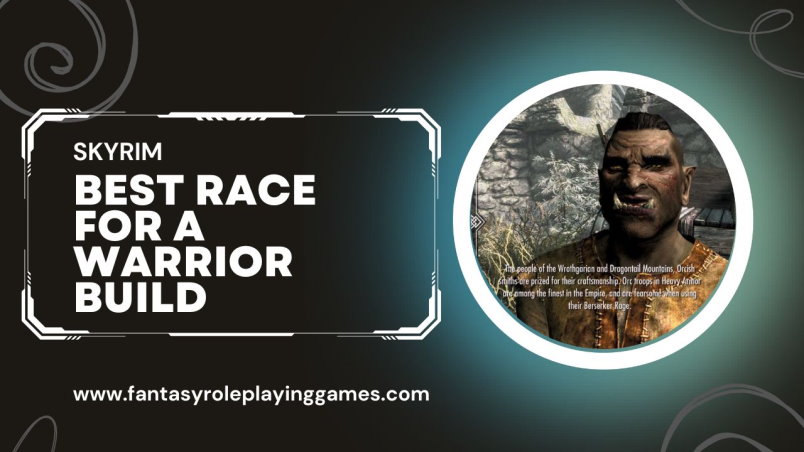 In Skyrim, there are many different races and cultures. Some of these races are just as strong as the other ones. Trying to be a true warrior in Skyrim poses challenges but the races below will help you get a good start.

A good warrior build should specialize in some sort of melee combat skill like One-handed or Two-Handed. It also helps if they get a skill boost in either heavy armor or block. For tank builds you will want to focus on heavy armor as warriors tend to get up close and personal. And smithing is vital as it allows your character to create the best weapons and armor quicker in the game if you have more points invested in smithing.

Below we will discuss some of the best races for a warrior build in Skyrim which include Nords, Imperials, Orcs, and Redguards.

Nords are the best fighters because of their strength, endurance, and skill with two-handed weapons. They are slightly above average in height and pale skinned. Elder Scrolls Skyrim’s location is the home of the Nords so it only feels right to pick them because of their ability to resist frost.

The Nord is an ideal choice for players who want to play as a character that uses both melees and ranged attacks in combat situations but focuses more on their attack skills as they get skill bonuses in both two-handed and one-handed.

Their +5 bonus to smithing also gives them a distinct warrior advantage as they can move on to craft better weapons and armor quicker in the game than most races.

The Orcs of the Wrothgarian Mountains are brutish warriors that can be found in various strongholds in Skyrim. They are very strong fighters with a thirst for blood and destruction. Unless you start the game as an Orc you will not be accepted in Orc strongholds without proving yourself.

Orcs excel in not only fighting but also smithing and heavy armor. Their Berserker Rage ability allows them to do double damage and take half damage for 60 seconds which can be used for a very powerful attack strategy against dragons.

Redguards are a race of warriors from the desert province of Hammerfell, who have a natural resistance to poison. They are strong and agile, skilled with a sword and shield, and good at stealth and archery. Redguards also have a natural ability for defense making them a good block and parry option.

Redguards have a unique ability to regenerate stamina faster for a short period of time which allows you to attack your opponents quicker or make a quick getaway if needed. They have a few bonuses to some magic skills so they might make a good battle mage option.

The Imperials are people that hail from Cyrodill. They are known for their discipline, skill, and intelligence. The Imperial race makes a good warrior because of their bonuses to heavy armor, one-handed, and block.

Imperials also get a +10 skill bonus to restoration which means they can heal faster in battle without having to eat 50 wheels of cheese. The race’s special ability called Voice of the Emperor is handy in battle as you can calm nearby humanoids for 60 seconds. This might come in handy if you accidentally commit a crime or get into a fight with another humanoid.

I think that the best Skyrim race to be a warrior is the Orsimer (Orcs). They have powerful armor and weapons bonuses to start the game and will allow you to smith higher-level armor and weapons quicker in the game. Also, their Berserker Rage ability gives you a unique battle advantage that the other races in Skyrim just don’t provide.

Redguards and Nords would be a close second race for the best warrior because of some of their early abilities but for pure tank builds I would choose the Orcs.

For game playthroughs and more tips check out our Youtube channel.