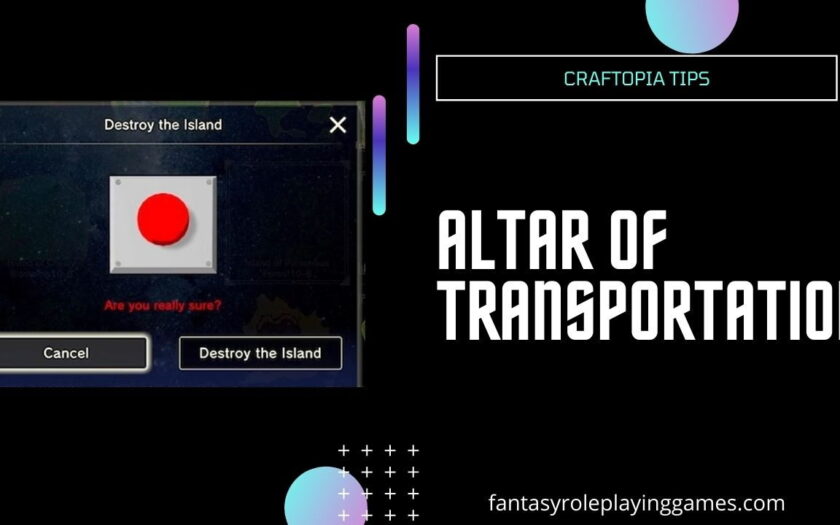 How do you unlock more islands in Craftopia?

When you access your altar of transportation to begin the game the island of beginnings will be the only one visible and the rest of the islands will have question marks on them. You will need to gather the required resources to unlock each additional island.

The higher the island level the more resources that level will require. You will have to unlock additional ages in order to require certain resources to unlock the higher islands.

How do you rename an island at an altar of transportation?

When you access the map you can click X (on Xbox) you can rename an island on the map after you unlock it. This can be useful further in the game if you want to move your base. You can rename it Home or Base 1 so you can remember which island your base is on.

I also use this to label islands that have bosses that I want to farm resources from. Or if the island has an Abandoned mine I want to go back to. For instance, if there is a dungeon with an Executioner at grid E3 then I will rename the map “Exec E3”. This helps me keep track of bosses and prevents me from having to keep additional notes outside the game.

How do you destroy an island?

After you have played the game for a while and unlocked a large portion of the islands you may want to destroy an island. Perhaps you are looking to spawn a particular island or just need different resources you can destroy an island and unlock it again.

Almost every island has an Anubis on a floating island flying high above the island. Just knock down his health and capture him with a monster prism. He won’t fight back so he should be easy to capture.

Explosive barrels can be bought from merchants, or you can craft them. You can also find them on various islands like the Island of Fire and Sand or the Island of Fallen Leaves. Just be careful because they will have enemies near them that can detonate the barrels while you are trying to pick them up.

Cogwheels can be crafted at your workbench and the battery can be generated on a Generator Small. See this guide on how to automate battery generation.

To destroy an island with a recreation button you need to access your altar of transportation. Once you have the map open you select the island you want to destroy and click the Y (on Xbox) button.

When you click the Y button you will be prompted with an Are you Sure? dialog. ONce you confirm that you will get a button that says are you really really sure? Remember that if you destroy an island it will destroy any buildings, chests, or automation you may have set up on that island.

Now that the island is destroyed you will see it returned to its original state of being an unlocked island.

The developers announced that big changes will be coming to the game with the seamless world update. As of right now, they are months away from this update but once this update comes I have a feeling all of this altar of transportation system will either be gone or they will drastically change how it works.

As soon as the seamless world update releases I will update this guide with any changes that occurred to the altar of transportation.