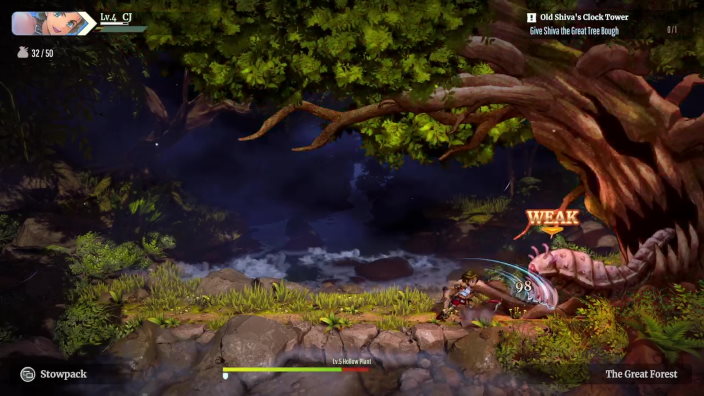 Eiyuden Chronicle Rising How to Complete the 3rd Main Quest

Once you have completed the 2nd Main Quest Ganesh directs you to his Priya’s grandfather for the 3rd Main Quest – Old Shiva’s Clock Tower. You are tasked with helping Shiva repair the old clock tower.

If you head back to the right into the Plaza and continue right until you see a big pile of rubble and an old man standing in front of it.

Shiva gives you a brief history lesson on how New Nevaeh was born and why the Old Clock Tower is critical. He then tasks you with finding a Great Tree Bough from the biggest tree in the Great Forest.

After talking to Shiva, head to the right and back into the Great Forest. You will keep heading right fighting any gargoyles and slime pumpkins in your way. Make sure and break any boxes or jars you find along the way to earn more baqua.

As you venture further right you will meet a one-eyed merc that looks like a kangaroo staring at a rock. There is a brief interaction but this merc eventually moves on.

After going through another area you will come to a signpost. The music will change to indicate you are about to go up against a new large enemy. Keep going right.

Now you will see a monstrous tree. A boss battle tutorial should pop up if this is your first time and give you clues on how to defeat the great tree.

How do you defeat the Hollow Plant to get the Great Tree Bough?

In this first battle, the Hollow Plant will shoot out some red lasers to indicate where its roots will come up. You want to get between them or avoid the roots. Eventually, a worm will come out of the tree to attack you, which is the weak spot.

Take the Great Tree Bough back to Shiva and you will have a quick conversation about a sorcerer (but not too much info is gained here). After a brief interruption from the mayor and Gocteau, you get your stamp from Shiva and complete the 3rd main quest.