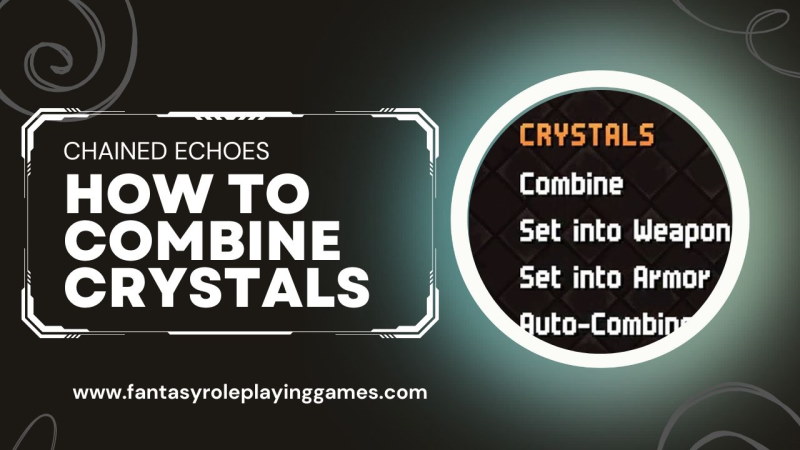 As you explore the lands of Valandis in Chained Echoes you will find red crystal formations scattered about. Early in the game in Farnsport, you learn from a blacksmith that you can combine crystals to make stronger crystals and then attach the crystals to weapons and armor.

Most areas in the wild have crystal formations that can be harvested. They will yield two crystals of random type and purity. These crystal formations will reset every 30 minutes of in-game time. So if you want to farm crystals you can simply fast-travel to areas and collect the crystals again after playing the game for 30 minutes.

There are 4 types of crystals:

In order to combine crystals or attach them to weapons and armor you must find a blacksmith anvil in the world. Typically these are found in towns but occasionally you will find them in the wild next to a vendor or cave entrance.

Once you interact with the anvil you can either manually combine crystals or you can have the game auto-combine any crystals that are level 1 and level 2.

Note** – If you are trying to attain the perfect combined crystals you may want to avoid auto-combining crystals as the game will just fuse them without regard to purity and size.

Why is there an asterisk (*) next to my crystal name?

Once you have fused a crystal that crystal can no longer be used as the fuse crystal and will be marked with an asterisk.

What is Rank Effect?

Each crystal can have an added effect that is triggered by its level. Rank III, Rank V, and Rank X. So when the crystal reaches these ranks from combining they will increase in power.

You can only slot crystals Rank III (3) or higher into weapons and armor.

What is crystal Purity?

Every time you combine a crystal it drops in purity. Crystal purity is represented by the letter P and the number. So a purity 3 crystal will be a P3. The purity of the fused crystal will always be disregarded. So if you have a base crystal with a purity of 1 and a fuse crystal of purity 3, it might be smarter to switch those to retain the higher purity if possible.

What are the white dots next to the crystal?

The white dots next to the crystal indicate how many slots (size of the crystal) this crystal will take up when attaching them to weapons or armor. Each weapon and armor has a set amount of open slots for crystals.

For example, this weapon has 4 empty circles. That means you can attach three one-circle crystals or two two-circle crystals to the weapon. The game will restrict the list of available crystals as the slots are used.

*Note: You can only add three crystals to armor or weapons. Even if you have 4 one-circle crystals it will only accept three of them.

Why should you utilize crystals?

Using the crystals can make the game so much easier to play. In fact, if you play on the harder difficulties I would say it is a must to maximize using crystals.

How do you maximize your crystals?

Your best strategy is to always start with crystals that only take up one slot. When combining try to start with one slot crystal so it will retain that size and try to pick the crystal with the highest purity.

When deciding on what crystals to use on what character the crystal should always augment the build you are going for.

A few examples of some character builds with crystals:

Lenne – She has some good fire and water attacks. You can find crystals that will enhance those attacks or cause a debuff on the enemy to make those attacks more powerful.

Sienna – You can use agility crystals to give Sienna agility buffs along with other agility-related items and give her a chance to strike much more often.

Glenn – Glenn can be an absolute tank so utilize crystals to enhance attack or raise DEF.

Ser Victor and Ba’Thraz – Both are good at magic. Utilize crystals that increase magic or mind.