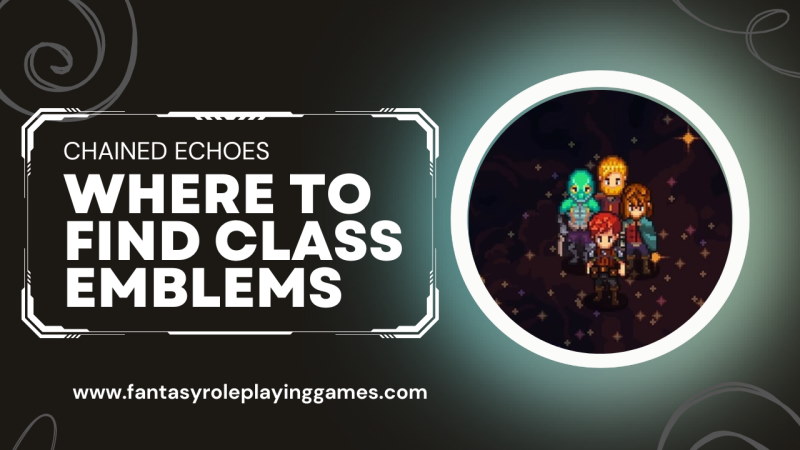 Class Emblems in Chained Echoes are a crucial part of the equipment your party will need to be successful. The Class Emblems not only enhance your character’s stats but also unlock additional skills to add to your party’s arsenal.

To unlock a Class Emblem besides finding them you must have sacred water and pray at the statue that contains the Class Emblem. The sacred waters can be found either in chests or unlocked through the quest board’s reward chains.

After you pray to the hero you will be challenged in battle. Once you are successful in battle you will be awarded the class emblem that is related to the statue that you prayed to.

Here is where you can find the 12 Class Emblems in Chained Echoes:

This one should be the easiest to find. As you progress through the early story you will find this class emblem in the Narslene Sewers just before you exit. Sienna should have stolen sacred water so you should have sacred water in your inventory already.

If you have reached Basil this emblem is south of Basil. Leave Basil and go through the forest to the southeast. You will drop down a big hole and then as you follow the path you will run into this emblem. There is also a fast-travel stone located close to it.

This one is really tricky to find but you will hear rumors of a hidden scientist’s camp in Fiorwoods. If you head south from the middle of the Fiorwoods you will see light marks in the leaves in some trees.

These marks indicate a hidden path through the trees. Follow the hidden path to find the scientist’s camp and as you work your way around to the water you will find the Vampire statue.

The Shaman Emblem is located in Perpetua. You will run into a magic barrier and then head north. From here you will find some mushrooms that you can traverse to the west. Once at the next area, you will find the Shaman statue.

Once you progress to the Kindreld Monastery make your way to the top floor. You might actually see it before you can get to it but just keep going up until you are on top of the monastery.

If you exit a rooftop in Rockbottom and head north you will see a little grouping of trees. You can go between the trees and you will see some crabs walking around. The Bandit Emblem is here BUT DON’T FORGET TO TALK TO THE CRABS! You have the opportunity to pick up a couple of achievements (on Xbox at least) here so make sure and spend a little time with the crabs.

This emblem is located in the western part of Ograne where the Tadeyes live. This is also the location where a unique monster can spawn Senior Tadeye.

There is sacred water nearby so don’t forget to grab it while in the area.

In the southwest of Shambala, there is an island that contains the next class emblem. You will find the Chemist statue located on a small island. You will need your Sky Armor to access this statue as it is in the very southwest corner. You can also meet Archy nearby here who is an architect that can join your clan.

The Pyromancer Emblem will be a reward for clearing a Leonar Temple. This challenge is located to the North of Flandern.

The Rune Knight Emblem will be a reward for clearing a Leonar Temple. The challenge is located to the West (left) of Perpetua.

The Gambler Emblem will be a reward for clearing a Leonar Temple. This challenge is located near the Kortara Mountain range.