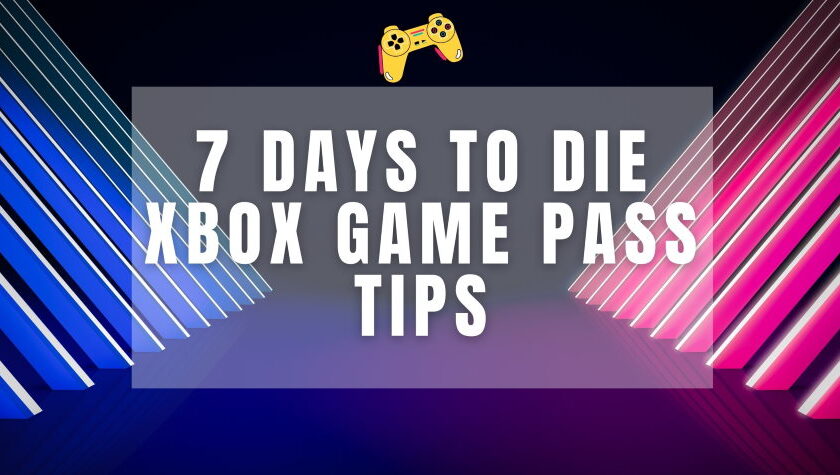 7 Days to Die was recently released to Game Pass for Xbox. For a lot of people, this may be their first introduction to the game. I have played the game on Xbox since it was originally released back in 2016 as a Game Preview.

Over the years the developers (The Fun Pimps) worked with a third-party team at Telltale Games to help push the updates and changes to the Xbox version. But when Telltale Games went bankrupt the updates stopped and I imagine a lot of people stopped buying the game or even playing on the Xbox console.

The PC version of 7 Days to Die has been continually updated and has actually come a long way in terms of polish and features.  If you migrated to the PC version you might have forgotten where 7 Days to Die landed and how to play it on Xbox.

Here are some tips and advice for those playing 7 Days to Die on Game Pass on Xbox for the first time.

It doesn’t matter what you are waiting on or what is going on always be doing something. Gathering wood, stone, iron, or reinforcing your base. Also, loot any bird’s nest you may find as eggs and feathers are essential in this game.

There is no way to automate gathering resources so gather as much as you can whenever you can and have plenty stored in a chest. You will also want to cook things and have your forge running constantly. But beware as fires can attract zombies.

You will want to build a forge as quickly as you can gather the needed materials. The main roadblock is typically getting leather but you can kill some animals to get the leather or destroy some furniture and gather leather. The forge will allow you to really build some advanced materials.

The controls are frustrating

The controls are very much designed for PC in a point-and-click fashion. Using a controller is painful but after a while, you will get a hang of going through the various menus with a controller. Just keep practicing.

You will encounter book stores around small towns. Inside these bookstores are recipes for many of the items you will need to survive. Loot these book stores as quickly as you find them and read the recipes to unlock better gear.

Build or find a base near a trader

One of the game’s only quests is to find a trader. You will get a marker on your map and I will always suggest going and finding it and trying to build a suitable base (or find one) very close to the trader. The trader is only open during daylight hours and he sells valuable items that are hard to find in the world.

The trader will sell gun parts, full guns, armor, and other supplies that really help you out in the game. Some traders also have things available in their compound that save you from building it early game. You can find concrete mixers and workbenches in some trader compounds.

Use an existing structure for your first base

The game is called 7 Days to Die because every 7 days a massive horde of zombies will come after you. You will need a base to defend yourself and make it through the night. But don’t go out and try to build one from scratch to start with.

There are many existing buildings that make really good bases to start with and all you have to do is board up a few windows and patch a few holes. If you are lucky you might even spawn near a prison that has concrete walls to protect you.

Sometimes the random map creation sucks. You will spawn in a horrible location and have no resources and die a lot. Instead of having to travel halfway around the map just make a new one until you start out in a suitable location.

The mini bike and crossbow are your friends

Above I mentioned finding recipes for things you can craft. The mini bike and the crossbow are the two items you really want to find recipes for. The mini bike can hold extra gear for loot runs and make moving around the map much easier.

The crossbow to me is by far one of the best weapons in the game. The ammo is easy to craft and you can get good and headshot most typical zombies.

Two biomes cause me the biggest headaches. The snow biome and the destroyed house biome. I am not sure what the official name is for the destroyed house biome but when you get there you will see what I am talking about.
The snow biome sucks because you are constantly fighting the elements and lumberjacks. Lumberjacks move slow but can really mess you up.

The destroyed house biome is the absolute worst biome ever. Dogs will spawn at a higher rate in this biome and they can be absolutely brutal to fight off early in the game. There are also random land mines scattered in this biome. There is nothing worse than riding along on your minibike and having it blow up because you hit a land mine.

Every map whether it is the Navzgene or random map will have a big destroyed city as part of the map. This place contains nothing more than death. Every street is littered with feral zombies, bloaters, and spider zombies. And the rewards you get are just not worth it.

If you find small towns that have intact houses and buildings those are the areas worth looting and maybe even setting up a base in.

If you find a cave be aware there will probably be a bear that will spawn nearby. They can also spawn just about anywhere but try to avoid them at all costs. They will take a ton of damage before they go down.

If you see a supply drop go get it. Sometimes they will land in areas that you want to avoid but if it is in a safe location grab them as there will be valuable survival items and possible gun parts that you will want.

When you build your base scatter wooden spikes all around it. This will help weaken and maybe even kill the zombies before they can get to your base walls. The wooden spikes are easy to build and require just wood and you can upgrade them to metal spikes with some iron.

When it gets dark the game is DARK! You need a light source and the torch means you can’t hold a weapon. There are also flashlights but unless you have them attached to a gun they are useless. Having a mining helmet on your head helps light things up and keeps your hands free for fighting.

The split-screen function in this game makes playing games with friends or family very easy and enjoyable. And it really helps to have someone watching your back. You can always play multiplayer but if you like slapping someone in their head for making dumb mistakes add a controller and play away.

You can always turn off zombies

If the zombies annoy you or you just want to get things done without having to fight with zombies you can always turn them off for a bit. I don’t recommend this because it takes away a core piece of the game but it is available.

The Xbox version did get an official version 1 and they removed the game preview status at some point. But it is still a very incomplete game. The graphics on Xbox are not good compared to most modern games being released. There is no end quest or story. Just survive as long as you can.

But this doesn’t take away from the fun of this game. The looting, survival, crafting, and building components are really good and can be really fun. And playing with friends can make it even more enjoyable.

The PC Game Pass version does have all the updates and is on Alpha 20 (the latest build) so if you have a good gaming PC and have Game Pass that might be the version you want to play on. There are a lot more updates, vehicles, zombies, and more in the Alpha 20 build and the graphics are substantially better.

The developers of 7 Days to Die have also stated they want to bring an updated version of the game back to consoles. That may either be as many updates as they can from the PC version or maybe an entirely new game that is considered a sequel to this version.

Check out our Youtube channel and subscribe if you want to see some playthrough videos of 7 Days to Die on Xbox Game Pass. Videos will be up soon.