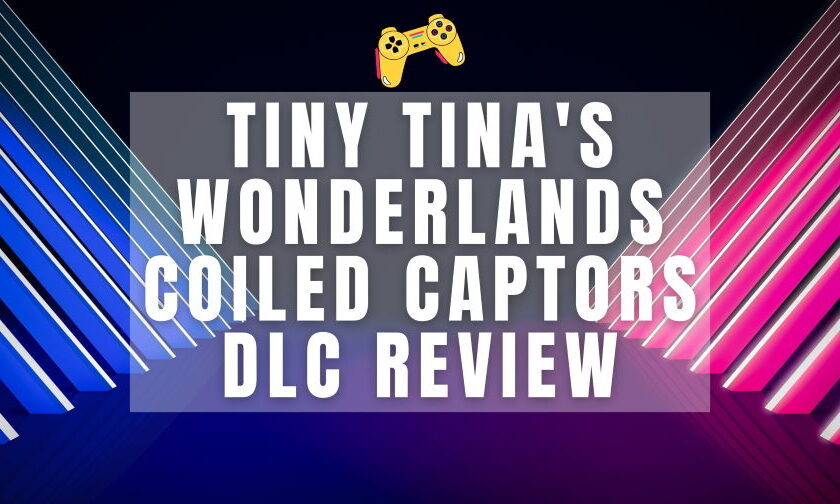 This review for the new Tiny Tina’s Wonderlands Coiled Captors DLC will be short.

Because the DLC was so short it is actually pretty sad that they put this out as the first DLC.

The new DLC story goes something like this. The Coiled captured an old god and trapped him in the body of a seawarg (the dog/shark type enemies). Then they gave him an embarrassing name like “Chums” to make it worse.

Your job is to work your way through a series of maps and “free” Chums by killing him.

Where do you access the Tiny Tina’s Wonderlands Coiled Captors DLC?

In the overworld right outside of Brighthoof there is a new area called Dreamveil Overlook. It is located right next to the overworld character Bach Stahb close to the green shrine for reference.

When you enter Dreamveil Overlook you will find the new Wheel of Fate and Vesper who will guide you into this DLC. To actually enter the DLC you have to enter the mirror near the Wheel of Fate.

There really isn’t much to review here. It took me less than 30 minutes to do everything. And basically, this is just a series of chained Chaos Chambers with a boss at the end that is very easy to beat. Now there will be weekly events where the boss will change forms and become more difficult, but that just seems like something cheesy they added on to make it seem like there was more content than what was really there.

The enemies are the same exact enemies you have seen dozen of times throughout the Wonderlands. Coiled enemies, crabs, and dogfish/seawards are scattered about. There are a few puzzles to figure out but there is no challenge at all to these puzzles.

There is a new mechanic where you will gain souls for every enemy you kill and you can find extra souls in hidden chests. These souls are used at the Wheel of Fate to get more loot. The issue with this is the loot hasn’t been great. I got two legendary items but it was the same legendary item and it wasn’t even that good of a legendary item.

The main boss “Chums” the old god wasn’t that difficult. He had a little more health than a normal dogfish but it was not a challenge. Hopefully, the future forms will raise the challenge level and I believe there is an additional achievement for beating all forms of “Chums”.

This content was probably less content than some of the free DLC drops Borderlands 3 had. I am so confused why they dropped this DLC so early with such little content but so far this is backfiring on Gearbox completely.

Considering the entire game is based on one of the best DLCs ever for the franchise it is a huge disappointment that they released this in such a state. There are also a lot of bugs being reported to pile on top of the weak amount of content that was released.

Hopefully, the rest of the DLCS for Tiny Tina’s Wonderlands will be more substantial but if anything Gearbox will have to do some damage control to keep people from totally abandoning this game.

Right now I would say avoid this DLC unless you already bought the season pass or Chaotic Great edition like I did. It’s just not worth it and is very boring.