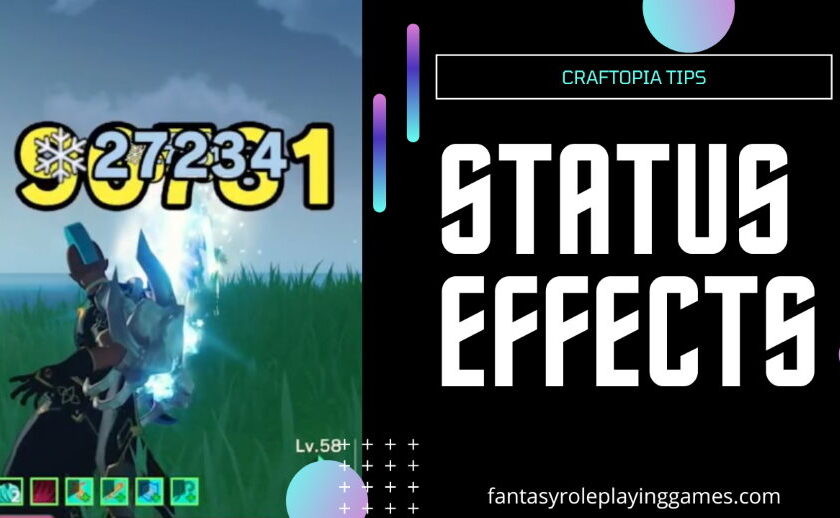 In Craftopia the user and the enemy can suffer from various status effects. Most of these effects cause a negative status to happen either to the enemy or the player.

Here is a list of status effects, a description of what happens, and how to cure the status effect if possible.

Stun is when the player or enemy cannot move for a while. If you rushed a boss too quickly most of them will stun you and your player will stand dazed with stars circling their head. You can also stun enemies with a shield bash.

Bosses are the main culprit of the stun but there are some lesser enemies that can hit you can stun you like an Orc.

For the player, the only retribution is to quickly hit a button to recover from the stun.

Confusion is caused by Belle Fleur attacks. Your movement will be randomized and you will have question marks appear above your head as you try to move or attack.

A player can consume Holy Water in order to cure themselves of Confusion or you can just wait until it passes.

If you have fought a Griffin you probably have been hit with Slow. Your player will move extremely slow and have a black cloud around their feet.

A player can consume Physical Water in order to cure themselves of Slow. It will also eventually pass with a little bit of time.

Dark Anubis can cause this with a special attack. You will receive a large amount of damage that ignores defense.

The Grief status can be removed by consuming holy water.

One of the early missions is to set yourself on fire with your campfire. The easiest way to get rid of the fire is to jump into the water.

You can be set on fire through campfires, goblin shaman attacks, dragon attacks, and many other ways. You can also set enemies on fire with campfires, fire arrows, or certain magic skills.

To cure fire you can do one of the following:

Buildings can also catch on fire. I have advised people against building wooden structures because a stray cow or chicken could step in a campfire and then run around catching your base on fire. You can put out the fire with a sprinkler or bucket of water.

There is a skill called unflammable that will help prevent you from catching on fire or if you do catch on fire it will limit the damage done.

Hell flame is a deeper level of flame that can only be applied by using Flame Sword Surtr or Hell’s Blaze skill.

Tyrant Snake and roots have attacks that can poison the player. You can also poison enemies that don’t have poison resistance with a poison arrow and the miasma skill.

When poisoned the player or enemy will take poison damage and have a purple cloud and bubbles around them to indicate they are poisoned.

Golems, bone dragons, Tyrant snake, and mobile roots are all immune to poison.

If you have ever seen a dissolve enemy they look like they have acid-spewing out of them. The Sand Eater Worm will spew acid if you hit his weak spots.

If the player gets hit with this they will have low defense (DEF) for a short period of time. The player can consume soul water to negate this effect.

When you wield a staff you can cast an arcane bolt against an enemy. If you hit them enough times you will notice that they will have a blue glowing aura around them. When this happens they are being affected by reduced magic defense.

As of now this effect can only harm enemies and cannot be applied to players. It will disappear after the enemy has been hit with a magic attack or will just go away after a short time.

With the addition of new weapons like Mjolnir, Seigfried, and (insert two-handed weapon) you can now cause electro or charged status effect on enemies. Essentially you are going to electrocute them and they will continuously take electric damage.

Lightning Bolts and Judgement Shot skills can also cause a charged effect on enemies.
The electro status effect only lasts for 15 seconds.

The Freezing Ray skill can cause two status effects. This skill is one of the most powerful magic skills in the game and should be part of every magic build.

The cold status effect can substantially increase the damage the freezing ray causes and can be seen with a snowflake next to it.

The frozen status effect will fully encapsulate the enemy in a frozen state where they can no longer move. This is so powerful you can kill an enemy and they will stay frozen after death for a prolonged time.