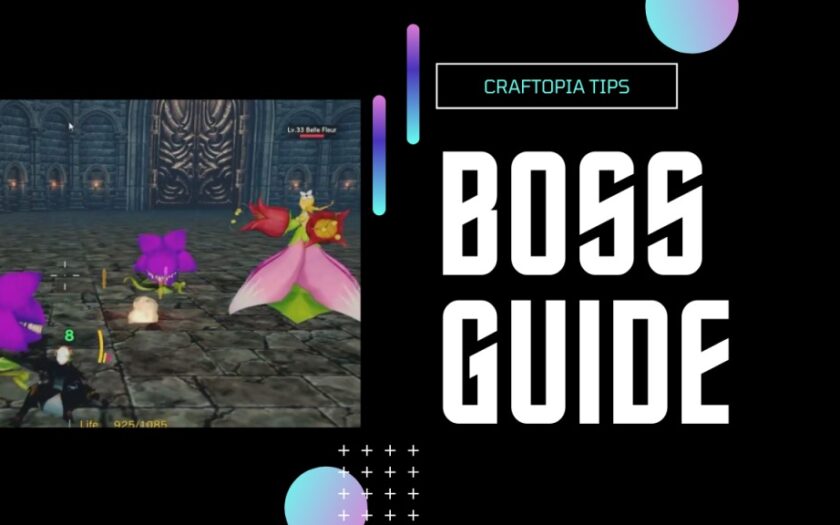 In Craftopia the game has several bosses. These are usually enemies that are larger and more powerful than your typical enemy and most will either spawn in dedicated islands or in dungeons (tombs).

Below is the list of bosses that I have run up against and the loot I have seen them drop. Some of these items have changed as they have been added to the game and some may have different names depending on what level they are. The developers are also updating the game pretty often so there may be either a boss added or they may change the name of the boss in the process. I know the last update brought us the Hydra and there are rumors of more bosses in the game’s code that have yet to be released.

After the Winter Content Update, the game added two more bosses. See below for the latest updates.

After the Boss Rush Dungeon Update, almost all of these bosses can be found in the boss rush dungeon.

Why do I need to farm bosses in Craftopia?

If you are looking to build Dragon Armor then bosses are key. You will have to farm the bosses to get the right kind of scales for your armor. There are also other important materials for high-end weapons that only bosses drop.

If you want to have some really incredible Craftopia character builds you need to farm bosses for the enchanted materials they drop. With some of their enchantments having up to 3 or 4 bonuses you can create some very powerful items to really give you some great character builds.

How can I farm bosses in Craftopia?

If you have made it to a Hell biome you can battle a Dark Anubis. If you beat this Dark Anubis he will drop an Indulgence of Anubis scroll. You can use these scrolls to respawn the boss over and over and keep killing them to get their loot.

If you have not unlocked a hell island the only other way to farm a boss is to keep re-entering a dungeon or tomb and hope the boss has respawned. Sometimes the timer is off and they will either respawn very quickly or very slow. I know in the early dungeons I have had bosses literally respawn 30 seconds after I killed the first boss.

I have also found that in a normal dungeon (not a Royal Tomb and not an Abandon Mine) you can run behind the exit portal and back into the main chamber the boss will respawn. I have used dashboards to speed up this process and it works very well. Click here to see a video where I demonstrate this.

What loot items do an Ancient/Stone/Lava Golem drop?

Depending on where you fight the Golem and the type you can get various types of ores with the Stone Golem’s, Ancient, or Lava Golem’s enchantment. The higher the level island the rarer the metals they will drop. Also, the higher level Golems can drop ores with Rematching, Veteran, or Adventurer’s enchantments.

Where do Golems spawn typically?

What loot items does a Tyrant Snake drop?

Where does Tyrant Snakes spawn typically?

I have seen Tyrant Snake mostly in dungeons but they can spawn on the Island of Poisonous Forest.

What loot items does a Crimson Dragon drop?

Depending on where you fight the Dragon and the type you can get various types of ores with the Crimson Dragon’s enchantment. The higher the level island the rarer the metals they will drop.

Where do Crimson Dragons spawn typically?

I have seen Crimson Dragons spawn on desert islands and near volcanos they are also spawning in hell. If you are on an island of variety they can spawn near the volcano of the island.

What loot items do a Bone Dragon drop?

Depending on where you fight the Dragon and the type you can get various types of ores with the Premordial, Eternal, or Bone Dragon’s enchantment. The higher the level island the rarer the metals they will drop.

Where do Bone Dragons spawn typically?

Bone Dragons will spawn in the Desert of Mountain island. Find a pile of dragon bones for a random encounter. These dragon bones will look smaller than the normal bones found on the island. They can also spawn on a Hell island.

What loot items does a King Mono drop?

King Mono only has a few items that they consistently drop. They will have enchantments of either No Clothes, Lovable Wise Ruler, Wise Ruler, Splendid, or King Mono’s.

Where does King Monos spawn typically?

They can be a dungeon boss or if you find a Prince Mono with 4 or more monos around him they can join together and form a King Mono.

What loot items does a Belle Fleur drop?

Belle Fleur will drop items with enchantments of either Fully Blooming, Blossoming, Budding, or Fleur’s.

Where does Belle Fleur spawn typically?

Belle Fleur can be a dungeon boss or can be found on the Island of Cherry Blossoms in the center of the map.

What loot items does an Executioner drop?

Executioners will drop items with Horrendous, Red-Eyes, and Purging enchantments.

Where do Executioners spawn typically?

I have typically found them in mid-level dungeons on island levels 4,5,6 and 7.

Messenger of the Ruling Indigo Underworld (aka Reaper)

What loot items does a Messenger of the Ruling Indigo Underworld (aka Repear) drop?

Where do Messenger of the Ruling Indigo Underworld spawn (aka Repear) typically?

I have typically found them in mid to upper-level dungeons. Also in hell dungeons, they tend to spawn more often.

What loot items does a Griffin drop?

Griffins drop items with Griffin, The Protector of the Gold’s, and The Never Ending Sky’s enchantments. There is also a random chance of dropping Griffon Wings.

Where do Griffins spawn typically?

Griffins can spawn in Royal Tombs (a variation of a dungeon) and there is a flat spot on the Island of Fallen Leaves where they can spawn regularly.

What loot items does a Lizard Gunner drop?

Lizard Gunners drop items with Gunslinger, Bouncer’s, Quick Draw, and Hollow Point enchantments. You can also throw a pet Lizard Gunner into a Livestock Farm and get Black Gunpowder.

Where do Lizard Gunners spawn typically?

What loot items does a Fenrir drop?

Where do Fenrirs spawn typically?

Fenrir will spawn on the Island of Frozen Mountain, there is a flat circular spot near the middle of that island that is a good spawn point for the Fenrir.

What loot items does a Hydra drop?

Where do Hydras spawn typically?

Hydras will spawn on an Island of Poisonous Forest. The location is near the middle of the map in a flat area right next to a dungeon.

What loot items does a Dark Anubis (aka Sin Measuring Anubis) drop?

Dark Anubis will drop items with Elementary, Guard, Trial’s enchantments. He has a chance to drop Magical Stones with a Guardian or Satan enchant on them.

Where does Dark Anubis (aka Sin Measuring Anubis)  spawn typically?

Dark Anubis is found on the Hell islands. You have to destroy 3 Lava Golems to unlock Dark Anubis so you can get to him, this will bring down the barrier protecting him. He will be on the upper platform with the chains running to him.

What loot items does a Fafnir drop?

Where does Fafnir spawn typically?

Fafnir is found on the Island of the Big Bridge. He will spawn on the big bridge after defeating the 3 guardian paladins around the map.

What loot items does a Giant Sand Worm drop?

The Giant Sand Worm drops items with Worm’s, Terraborn, Earthborn, and Melting enchantments. There is a small chance that he will drop a light rosary blueprint and/or a dark rosary blueprint.

The Giant Sand Worm is found on the Island of Fire and Sand. Some of the items he drops can only happen when you hit his weak spots on the side of the body.

There are also some mini-bosses that can spawn while roaming the various islands.

The boss Pekomet comes in a few different varieties. But you will get a notification that it appears and it should be nearby. If you have a detector it will show on your map if equipped.

The Ill Omen Pekomet has a large mono bombing attack that mimics the meteor skill. I call it a mono air raid. Every time I have fought the Pekomet it doesn’t do much damage and was fairly easy to dispatch.

The enchants it drops are very good for increasing your tamer skills and makes your pets more viable in the game. Also the Ill Omen Pekomet is the fastest land mount when tamed.

The lizard guillotine has some really good rare enchants like the executioner’s mastermind, leap in the dark.

Cardinal Goblin (of the sun)

The Cardinal Goblins is a rare mini-boss that spawns from a Goblin Shaman. If you get the notification that one has appeared check your nearest skull or goblin encampment and if you have a detector equipped check your mini map.

The Cardinal Goblin drops enchantments of Cardinal, Eat Everything, and Glittering among others.

As always if you see something wrong or see a name change let me know in the comments. I am trying to keep this list up to date and as accurate as possible. I know there are a lot of mystery items that can only be farmed from bosses so this list should help you get there.

If you found this guide helpful check out our Youtube channel and subscribe for more tips on Craftopia.