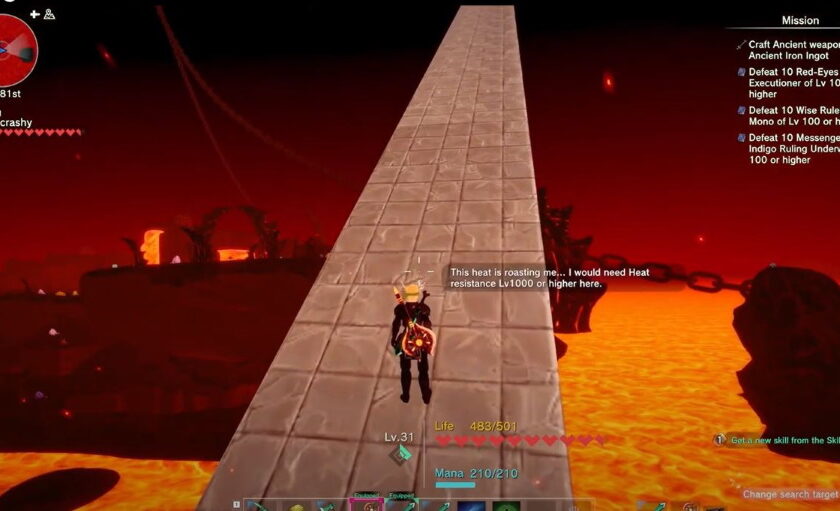 As I progressed through playing Craftopia I wonder quite often how in the hell do I get some of these items? Some of them are just mysteries of whether you can find them randomly in the world or if they are random enemy drops or if you can actually craft them.

To advance to the Innovative Age of Fire you need hell peppers.

The only place you can get hell peppers early is to travel to a hell island.

But as soon as you get to hell island you need heat resistance +1000 to survive.

How do you get such a high heat resistance?

Well, you need to either have Dragon Armor, which is very hard to get early in the game or you need a hell resistance potion.

And what do I need to craft a hell resistance potion? Hell peppers.

Now you see this vicious circle the developers of Craftopia have made. But it doesn’t have to be that complicated. Here is an easy strategy you can use to get hell peppers without having Dragon Armor and without having hell resistance potions.

The first step is unlocking a hell island. You have to get to level 5 on the map and one of the islands you unlock should be a hell island. I also wouldn’t recommend starting this unless you are at least level 30 or so.

Once you have unlocked a hell island you need some things to prepare for the trip.

Glider – You should already have one by this point. But if not craft one.

Helicopter (alternate) – If you have a few of these you can use these instead of stone walls but know the helicopter will catch on fire.

Food – Preferably things that will raise health and/or mana.

After you have gathered the supplies above you can go ahead and teleport to hell island. When you get to the island you won’t notice any damage happening immediately. But as soon as you move slightly away you will start taking fire damage and your satiation will start dropping quickly.

This is where the healing and food come in. Your stats shouldn’t drop too quickly so you should be able to regularly heal and eat food to keep everything up.

Now if you have the helicopter you can start flying toward the nearest large landmass you see. If you are using stone walls start building a ramp towards the island. Once you get high enough you can jump and glide to the first large island you see.

Once you are on this landmass you should see a fiery rock skull. This is where the hell peppers are going to be. There will be a lot of enemies around so be prepared to just run past them because if you are lower level they can knock you out pretty quick.

Where are the hell peppers in the hell biome?

Run into the large skull and collect the hell peppers. Typically there should be about 3 to 5 depending on how many spawned. If you are lucky you will also get some hell pepper seeds.

Then just run back towards the Altar of Transportation and glide back (or bring one with you and place it near the skull). Once you teleported back you can go to a potion brewing stand and craft some hell resistance potions. After you have a few of those you can keep making runs to hell island and the hell peppers should respawn.

If you were able to get some hell pepper seeds or have a seed extractor you can start growing your own hell peppers and not even have to make the return trip to get more. See this farming guide for more info on how to grow hell peppers.

And after you have the hell resistance potions you can double dip in hell and start collecting hellfire wood, heated mineral, and any other resources that only come from this biome to help you advance to the Innovative Age of Fire.

How do you get hellfire wood and heated mineral?

After the Winter Content update on 12/15/2021, you can now acquire Dragon Armor via a High-Grade Gacha Capsule. You can get these by finding Equipment Gacha Coins and cashing them in at a Prism Gacha. The High-Grade Gacha Capsules have a chance to drop some really nice equipment early in the game so it might be worth it to get some. See this video on how to acquire them.

Have you found an easier way to get hell peppers early in the game? If so drop us a comment and let us know. Also, give us a subscribe on our Youtube channel if you found this helpful.