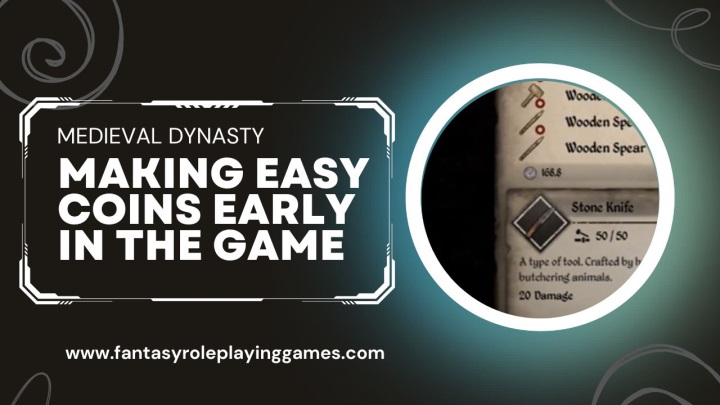 How to make coins early in Medieval Dynasty

Medieval Dynasty is a semi-realistic survival/city management game. One of the realistic parts of the game is that you have to pay taxes at the end of the year. If you are in the US and have ever owned property you probably understand the idea of having to pay property taxes.

In fact to do a lot of things to start out the game you need coins. Buying seeds, tools, animals, and even fast travel all costs coins. And you will quickly realize that these things are all fairly expensive.

So how do you make coins early in Medieval Dynasty?

One of the quickest and easiest ways to make coins in Medieval Dynasty is to build tools and sell them. Everything that you can handcraft can be sold for a decent amount of coin. And all the resources that you need to make those tools can be picked up from the ground almost everywhere.

Stone knives are probably the quickest and easiest ways to make a quick amount of coin as they only require some sticks and two stones to craft. They will always result in 20 coins when you sell them and since they don’t weigh much you can carry probably about 10 at a time.

Wooden Hammers, Stone Axes, and Shovels are also good to make easy coins but they are a little heavier and require a bit more resources.

Completing quests for your neighbors is another easy way to make coins early in the game. All throughout Dobroniega’s Story, there are opportunities to make some extra coin. And once you finish it she will reward you with 200 coins.

Other random NPCs can give you easy quests like crafting a certain item or picking up something from another NPC. They can reward you with either coins or other usable items that can be sold to other vendors for more coins.

Exploring can also yield some coins. More than likely it is the items you will find while out exploring but you can occasionally run across a chest or barrel that will have coins inside of it. There are also hidden coins and bags with coins found across the valley.

If you stick to the paths looked for overturned carts that contain items that can be sold, or if you walk along the rivers and lakes there will be barrels that can be opened and looted.

There are also camps scattered around the valley that contains lootable storage. But beware that sometimes those camps are inhabited by bandits. And if you are not prepared the bandits can finish you off quickly. The bandits typically don’t spawn until your 2nd year so finding these camps early in your game will be much easier to loot.

The final way to make coins early is to sell the resources you collect. Stones, straw, flowers, fur, leather, and logs can all be sold for a small amount of coin. This isn’t much but if you just need some quick coin to buy something you can always sell these resources that you can get more of.

But when considering selling resources you are almost always better off crafting an item out of the resources if you can than selling the crafted item. It will almost always yield more coins.

Medieval Dynasty is set up as a long-term game. It isn’t really geared toward rushing through but if you are an impatient gamer like myself you will want to get as much coin as possible as early as possible.

By crafting and selling stone knives, doing quests, and exploring the valley you will have plenty of coins to not only pay your taxes but to get you started with some good gear that can be purchased from merchants.