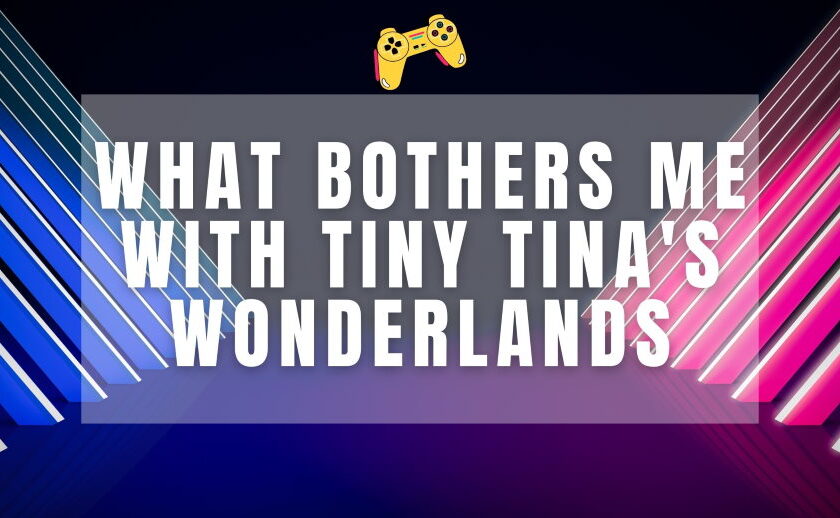 I want to talk about what bothers me in Tiny Tina’s Wonderlands. I really like this game and I’ve been a big fan of the Borderlands franchise so this was a must-buy game for me.

I pre-ordered the game and most people say today don’t pre-order big games because they don’t live up to the hype. While I agree with this somewhat I knew this game was going to be built on top of the Borderlands 3 engine so it was going to be something I enjoyed already.

Even though it is a really good game there are some things that bother me so I wanted to explain why they bother me and I have hopes that they’ll fix these things. That’s the great thing about video games is there’s always a chance to fix things through updates and hotfixes and patches and DLCs.

I understand that that’s part of a role-playing game especially dungeon and dragons and other RPGs is that you have random encounters.  I thought it was kind of a cool idea when I first saw it and you know a couple of the first ones I thought oh this is cool.

You get to fight these guys and you get loot but it kind of stopped there and after a while, they just became really annoying. I do realize that you can actually punch the little character that’s chasing around the overworld to avoid the random encounter but it doesn’t always work right and you still get stuck having to do the random encounter.

When I’m trying to do a quest or trying to get somewhere to do something I don’t want to be bothered by these random encounters. I really felt like they kind of pushed it down everybody’s throat and there are also the little encampments that just didn’t even seem like there was a purpose to them they were just basically a random encounter that you have to do if you enter it. There was no negative if you didn’t do it and it was purely optional.

Yes there are a lot of bugs and yes it hasn’t been too long since they were released but the number of bugs is really hard to get past. They also built this game during the pandemic but that doesn’t exclude QA and trying to patch the bugs as soon as possible.

I’ve seen videos of people having loot that just went through the floor and the one thing that has happened to me is in the overworld when I hit a mimic chest there is a good chance I will just be frozen in that spot. It is supposed to be another random encounter that I do want to do (because of the loot). But this bug is hard to forgive because I have to fast travel to get unstuck.

I’ve also gotten stuck inside chests when I was knocked back by an enemy. I have two achievements that will not unlock right now. The achievements to reach level 40 and have loot luck above 3000. I have done both of those and the achievements still have not been unlocked.

These are the kind of bugs that can ruin the game a little bit. It doesn’t keep me from playing the games but it bothers me enough to wait and replay it or maybe play something different until a patch comes out.

We’ve already got the first DLC that dropped and yes I must have missed the memo. I don’t remember ever it being widely published that there was not going to be any story DLC in these first four DLCs that have been promised especially with the chaotic great edition.

This really just aggravates me to no end. I felt like we were promised DLC and yes the first one was DLC but really it was such a disappointment you literally, walk into the area and you see this fantastic carnival environment and you’re thinking wow this is going to be great I can’t imagine what we’re going to get out of this. But really all that you get is a wheel to spin and you get a mirror to go through and do basically what it equates to another chaos chamber with a big boss at the end.

I realize every week that that’s going to change that they’re going to add events and you know the enemy’s going to get more difficult but they didn’t even bother to add any real new enemy types and to me, that’s just lazy that’s just really felt like a cash grab.

I am just disappointed that it literally will take you less than 20 minutes to run through the first DLC right now. I really hope they make up for this and maybe they will come out with some free stuff as they did in Borderlands 3 with the Head hunter takedowns and the events for Halloween. Those were some pretty cool free DLCs that they came out with and were of a better caliber than this first DLC.

Brick makes an appearance, Claptrap was a must-have, and Mr. Torgue is always a laugh. But some strange exclusions like Marcus, Moxxie, Mordecai, and others seemed like they would have made a good fit in this game.

I realized that it was probably difficult to get those voice actors but to me here’s the thing about voice actors, THEY ARE VOICE ACTORS. You can find somebody that sounds similar and then you can write a story about why they sound different.

One of the cool things about Paladin Mike was they changed his gender (the voice actor was a girl in Borderlands 3) in the game. Tina has a backstory about how it was some cool character and she wanted to steal it. They could have done the same thing with Marcus or you know maybe bring back a Dr. Zedd or somebody from the rest of the Borderlands franchise.

I just felt like it was really lacking and you know the loot machines in the Assault on Dragon Keep actually took those characters and tweaked them to fit the vibe of the game. But in Tiny Tina’s Wonderlands, the loot machines were afterthoughts.

If you can pay Wanda Sykes, Andy Sandberg, and Will Arnett money to do voice acting then I think they probably could afford some of those other people to have them come in and do a few lines even for a few side quests would have been really nice.

The other NPCs in the game were very bland and not memorable. The blacksmith seemed like she could have used a better backstory and introduction and Izzy (Izzys Fizzys) had almost no story. They might fix some of these issues in further DLCs but as of today, there wasn’t much there.

It seems like when you start your game they put you in tutorial mode but for the first probably five or six levels the weapons are just so weak and everything is pretty boring. I feel like they need to kind of fix this in a future Borderlands game. You are level locked behind some really cool abilities and weapons so everything feels slow and burdensome.

Almost everything takes gold in this game. There are some things that take moon orbs and you can collect souls in the DLC but pretty much most things that you buy and need in this game require gold.

It is such a grind to get gold. You have to kill enemies get loot and sell and repeat. Although this is a staple in most RPGs I just always hate how much grind there is to get gold. The quests give you some gold but that is really just a drop in the hat to what you need.

Dying because of reloads

There are some weapons that when you throw them for a reload there is a status effect that is applied. But more often than not if you are not looking up while you are reloading they will explode and do an area of effect damage right on you. Then you die and guess what there is no enemy to get a death save anywhere to be found.

This really bothers me and I wish they would fix it that if the status effect is caused by you throwing your own weapon it should either cause less damage or no damage.

Maybe it’s just my loot luck but some of the legendary stuff especially the spells are basically trick spells they look cool and maybe they’ve got a cool side effect but they don’t feel truly legendary. It just seems like the legendary items were more for the funny factor not actually being useful.

Now I have had some pretty great legendary weapons that I really like and some, in fact, I’ve some of them for three or four levels past when I should have so the guns are pretty good for legendary but the rest of the items feel like trash.

There have already been some updates where they’ve done weapon adjustments and I really just wish they would leave it alone. If they’re gonna do anything then balance it by bringing what’s not good up to what is good.

People make builds and people play this game and they find something that works for them and then the developers came in and they tear it down and nerf the gun and now your build isn’t viable.

This isn’t a player vs player type game. And even multiplayer it is a good thing if your friends are good and can help you out. Quit trying to fix stuff that isn’t broken and ruining people’s builds.

There have been a lot of issues with multi-player sessions. Now those can be easily fixed but my big issue is the split-screen. Even in HD with a huge screen, the split-screen is atrocious. This was never a strong suit of Borderlands 3 but I am not sure how this worked so well in Borderlands 1 and 2 but with the next-gen games, it just went to trash.

Dungeons and Dragons and role-playing games center around having choices. I felt a lot of the choices in this game were either taken from you or just were meaningless.

This really showed up at the end of the game. They could have done so much more with the ending had they given the player a few outcomes and upped the replayability factor. I am on my second playthrough with a new character and it feels old now because I know everything that happens and I realize my choices mean little to nothing.

I really enjoy the game so far so don’t take this list as I hate the game. These are just things that bother me and I really hope they improve on or outright fix them. The game is a lot of fun and the addition of spells and some of their effects do make for an improved experience.

I love the custom character creation and hope they work that into future Borderlands games and the multi-class system is well done so I have hopes that will be integrated in the future also.