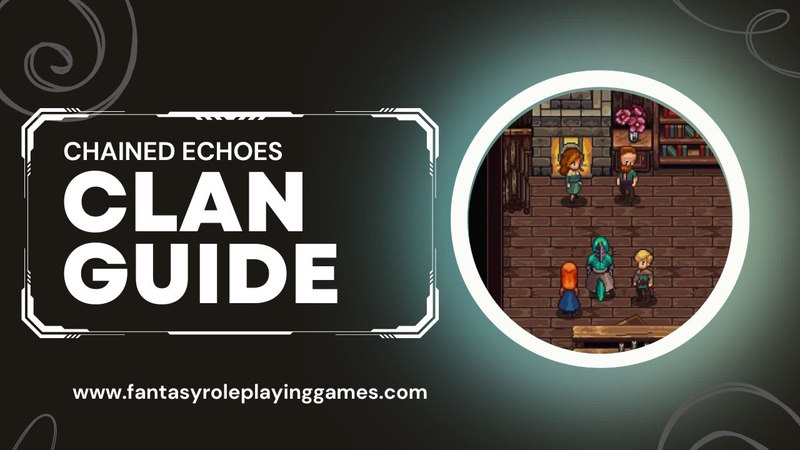 How to find your Clan members in Chained Echoes

As you progress through Chained Echoes you will reach Act 2. For Act 2 you unlock an airship to travel around in and you have a new base called Hermit’s Isle.

With this base, you can recruit clan members and those clan members will inhabit Hermit’s Isle and some of them can provide bonuses to you and your team.

Falora is on Hermit’s Isle. Once you find her and she joins the clan she will give you hints on where to find more new recruits. The only catch is she charges you 1000 ARC per tip. She will repeat the tip if you forget but once you find the recruit the tip goes away.

You can find Pavel on a raft out in the ocean. Head to the southwest corner of the world map in your airship, land on the raft, and convince him to join your clan.

Pavel will give you a gift every hour of gameplay. And you don’t have to check with him every hour. If you have played for 3 hours since checking in he will give you 3 gifts. At Hermit’s Isle, you can find him on a fishing dock fishing after you recruit him.

In the western part of the world map while flying in another airship you can interact with you will find Eddie. Eddie is an underappreciated musician who is looking forward to sharing his music with you and your clan.

Once your clan rank is high enough he will let you listen to music. The music you can listen to is all of the music from the game’s soundtrack.

If you head to the top of Mt. Rydell you will find Bao. Convince him to join your clan and he will reward you with a perk that enemies have a 50% chance to reward an additional SP after you win a battle.

Early in the game, there is a blacksmith in Farnsport that helps you with the crafting tutorial. Go back to that location and talk to the blacksmith (Deimsch).

Once you recruit him you will now have an anvil in your base. At first, he will be set up in the cave. Once you have reached Rank 3 for your clan he moves into a building.

When in New Wyrnshire head to the northern parts and get on the buildings. Here is where you will find Guy. Guy gives you no perks.

Vesta is a very important clan member because he gives you a very helpful perk. Vesta is located on an island in a lake on the world map accessible by airship. The island is northeast of Farnsport.

Once you get Vesta to join your clan you will have a treasure chest icon on the bottom left corner of the UI. The icon will tell you how many unopened treasure chests exist in the area. It will also show an indicator that there are hidden caves and buried treasures in the area.

Meeting Bernd is one of the more fascinating experiences with NPCs in the game. You can find him in a house in Rockbottom arguing with his wife. Make sure you read the dialogue because it gets pretty hilarious.

Bernd’s perk isn’t immediate. Once you reach the highest clan rank he gives you a Soul of Farnese. Those are needed to craft the ultimate weapons.

On an island in the western Arkant archipelago, you will find Tellah. Once Tellah is part of your clan you can now see where to find items in the inventory and deals menu. This is very helpful in unlocking deals or completing requirements for deals.

In the flying city of Hooge go east and find a platform with Gormit. Gormit offers no perks.

In the forest area of Perpetua, you will run into Pignon. Pignon will be out in the water and will ask for some of your crew to join her. After some discussion, you can convince Pignon to join your clan.

Pignon will set up in the lake deep in the cave. After you reach Rank 4 she will open her own spa.

Once your clan is big enough (5 members) and you have reached Act 3 in the game here is the next level of recruits you can seek out to join your clan.

When you are flying around Shambala head to the southeast. There is an island where you can find Archy (the architect). Archy does not offer any perks to your clan.

In the rainy park of the City of Tormund, you will find Bob. The park is located in the western part of Tormund. Bob does not offer any perks to your clan.

Head to Farnsport and towards the docks (near Magnolia’s house). You will see Triony fishing and can recruit him.
Once Triony joins your clan he will be located on the fishing pier.  When you reach the highest clan rank Triony will give you a Soul of Farnese.

At the entrance of Farnsport, you can find Kayn Sivar. Kayn Sivar will allow you to buy other airship models after he has joined your clan. You must buy the airship at Hooge

In the Tormund Underground, there will be a dog running around. Talk to Linus and recruit him for your clan. He will play random sound effects after he has joined your clan.

There will be a human wearing the mask of a Sova (bird mask). He is located in Shambala and has a pretty nice perk. After Thopas has joined your clan you will get 3 crystals from a crystal node instead of 2.

In the town of Flandern head to the west, and you can find Murchand. Once you convince him to join your clan he will open a shop on Hermit’s Isle.

Once your clan is big enough (16 members) and you have reached Act 4 you will move to Rank 3 for your clan. Your island will start to have actual buildings and look more like a village at this time. Here are the next level of recruits you can seek out to join your clan.

Back to Rockbottom to find Bernd’s not wife. Once she joins the clan you can choose which crystal types are dropped at crystal nodes.

In the middle of the Fiorwoods at the camp, you can find Jack. To get to Jack you need to head through the secret path in the trees. Jack offers no perks for your clan.

Head to Ograne grotto and go west to find a waterfall. You can recruit Gimaj and once he joins your clan you will have a 50% chance to get an additional 5 SP after a battle. You will need to have Incocybin Berries to get past the enemies in the area.

There is a camp in the Perpetua Desert. At this camp, you can recruit Zellor. Once Zellor has joined the clan shopping costs are reduced by 25%.

Once you have all 23 clan members you will achieve Rank 4 which is the final clan rank. No more members can be recruited after this is achieved.

For a playthrough and more tips for Chained Echoes visit and subscribe to our Youtube channel: Year of the Dad Gaming