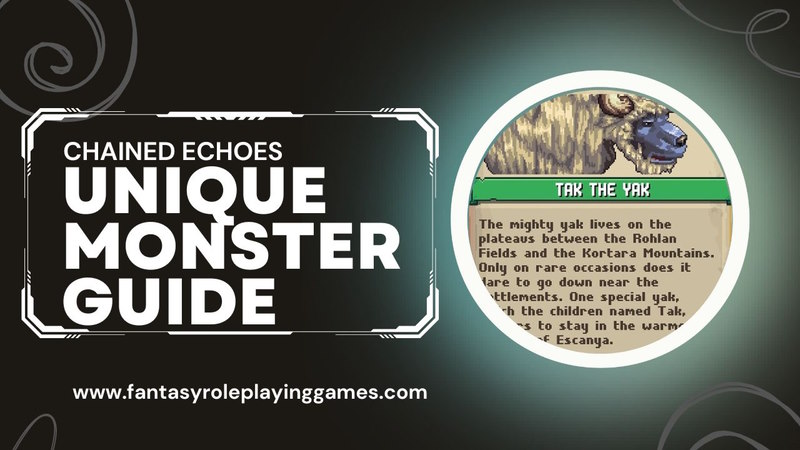 Early in the game when you enter Rohlan Fields exiting Farnsport, you are told about unique monsters. If you look at your rewards board you will notice there are several named enemies that you must defeat.

There is even a spot to unlock for defeating all the unique monsters on the rewards board.

After defeating a unique monster head back to the adventurer’s guild and they will give you a reward. And when you sell their unique drops to merchants it can unlock deals to some very powerful items.

Here is a guide to each Unique Monster and where to find them.

Tak the Yak might be the easiest unique monster to find. He is located in the Rohlan Fields just as you exit Farnsport to the north. He always spawns in this location.

You might be tempted to try and take him on as soon as you exit Farnsport and see him but I would avoid him for a little while until you get your feet wet.

Leaping the Frog is also located in Rohlan Fields. But he can spawn in one of three locations. Finding him might be a little more tricky. The best spot to catch him is north of Basil. If you keep loading in the Fast Travel location in Basil and head north you can increase your odds of him spawning there. I actually didn’t find him until I went back later in the game.

Dwelly of the Valley

In the middle part of the Fiorwoods, there is a section that you can run around. In this section on the west side you will find a Gazer and on the right (bottom right) you will encounter some Vin. Run around the tree 3 times and Ekskalibur will appear.

Ekskalibur is a turtle with a sword protruding from his back. Once you defeat him do not leave the Fiorwoods if you want to complete all the unique monsters on this list.

Da Capo is found in the southern part of Perpetua. There is a cave that leads to a part of the Ograne where one of the switches are located. Da Capo has a 25% chance to appear just outside of the cave.

In the southeast part of the Perpetua desert close to the camp and the church, you will see little swirls pop up from time to time. If you investigate these sand vortexes 3 times Humphry the Hungry will pop out. It is best if you fight Humphry the Hungry in your Sky Armor.

Hairy Otter is another beach dweller located in the Arkant Archipelago. Head to the southern island where the Taryn Base is located. Move all of your magic-wielding party members to the front and this will cause Hairy Otter to spawn.

Lenne, Victor, Amalia, Ba’thraz, or Magnolia can count as your magic party members.

In Shambala, you will hear of a special bird that appears near a house with a tree growing from it. If you enter the area with over 100,000 ARC then there is a chance that Golden Borb Bob will appear. I have found you don’t have to have the 100,000 ARC on you. Essentially if you have had that much ARC in the game thus far it counts.

The Golden Borb Bob has a pretty good chance to drop high-valued nuggets so this boss is a good way to farm ARC later in the game. Sienna can also steal Copper Nuggets from this monster.

In the northeastern portion of Shambala, there is a small island where you can land your Sky Armor. Aurora the Dragon has a 25% chance to spawn when landing on this island.

In the Ograne grottos, you will run into a large monster called Tadeye. They can only be defeated if you feed it an Inconcybin berry. But if you enter the area from the central portion and there are no Tadeyes then the Senior Tadeye unique monster has spawned.

The Senior Tadeye will spawn right next to the Heroes of Leonar statue on the far western side.

As you exit the Raminas Tower back into the Ograne Grottos Bog the Real Gob will appear.

For more Chained Echoes tips and playthroughs visit and subscribe to our Youtube Channel: Year of the Dad Gaming