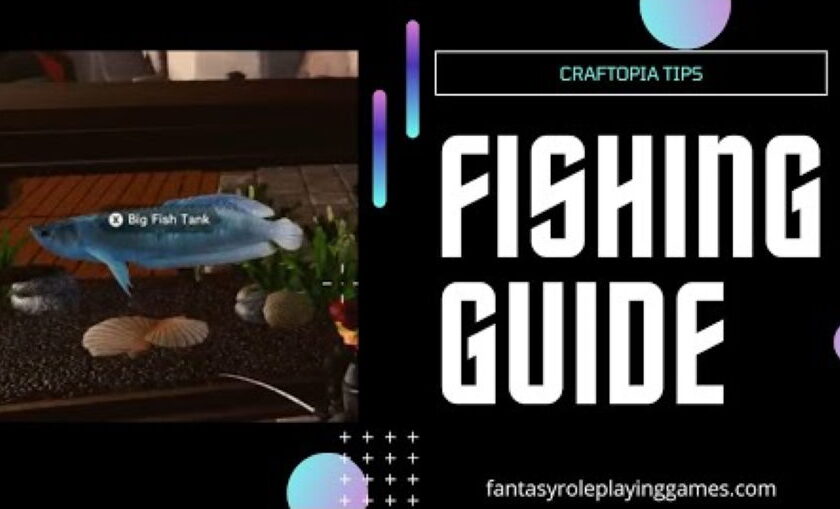 In Craftopia the Winter Content update brought about big changes to the fishing system. The update brought new fish, a new way to catch fish, a fishing boat, a new mission, and a few more interesting additions.

I wanted to cover all the things I know about fishing and share what I have found in the game.

Fishing with a rod

The most basic way to fish in Craftopia is by using a fishing rod. This has been in the game for a while now so not much changed with the recent update.

How do you build a fishing rod?

How do you fish with a fishing rod?

After you have crafted your fishing rod you equip the fishing rod just as you would a weapon. You then hit the RT (right trigger) button on Xbox and cast the bobber out. When the bobber goes underwater and you hear the thud sound press the RT button again to catch the fish.

How is a glass fiber fishing rod better?

Fishing with a fishing net

With the winter update, Craftopia added a new way to fish called the fishing net. If you go out into deeper waters you will see a large circle of fish that almost looks like a shadow. Instead of seeing just three fish swim around you will see an entire school of fish.

This school of fish will always spawn in the same approximate location when you reload an island. If you want to farm from these you will have to move your spawn point and altar of transportation closer to the fishing spot.

How do you build a fishing net?

You can craft a fishing net at your workbench. It requires the following:

According to the description, your best chance to catch fish is between 3 and 9. If you check the top left of your screen you can see the in-game clock that will tell you what time of day it is. When the hand is straight towards the bottom that is the time period you want to be in. When fishing at these times you have a better chance to catch more fish.

You can set the fishing net on a fishing boat, raft, or build a stone/wood floor and place it on the floor. Just position it where the net will fire directly over the top of the school of fish. If it hit correctly you will have items come up.

At these schools, you can catch almost any type of fish, slate of evolutions, rubber boots, cans, and so much more. The blueprints for the fishing boat and trick glider also come from these schools of fish.

You can use a fishing boat but first, you have to get the blueprint to build a fishing boat. The fishing boat can be crafted at a skill machine factory. The use is similar to that of the raft.

How to make fish fillets

One of the early ages in the game requires you to make some fish fillets. At your workbench, you can craft a fillet station. After you build the fillet station and deploy it you can access the station and place a fish on the station. It will either give you fillets or luxury fillets depending on the type of fish you provided.

This system is very similar to using a campfire to cook food and once the fillets are done you can retrieve them from the fillet station.

What can you catch while fishing

Here are the types of fish you can catch while fishing:

*Note – Just because a fish is saltwater or freshwater doesn’t mean it will only be caught in those locations. I have caught freshwater fish in the deeper water. I believe the chances are higher to catch a particular fish if you fish in the right location for that fish.

Here are the items I have caught while fishing:

You can fish with crab pots also. They must be placed in deep ocean water and after a predetermined amount of time you will have the chance to catch up to 4 items. It could be crabs, seaweed, squid, or other items.

Using skills to improve your odds

You can actually fish in the lava in hell. I have caught sulfur but I know you can catch other materials.

The same goes for fishing on the poisonous island you can catch bones and other materials specific to this island.

You can also fish in the sulfur springs on the island of fire and sand. There is a chance to catch sulfur, life potions, and gacha coins.

You can only catch some of the more rare fish on certain islands. Like the sunfish can be caught on an empty island. The school exists it is just way out in the ocean (since the island is so tiny it appears really far away). If you are having trouble catching a certain fish try a different island.

If you see a tentacle coming out of the water you can fish there. You are guaranteed to catch a Kraken and it will immediately start attacking you. On higher-level islands, you also have a chance to catch a Kraken at a regular fishing hole but it is rare.

Fisher Sanpei will ask for fish in exchange for some potential legendary items. It is a good idea to keep 3 of every kind of fish on hand to fulfill his quest. He can reward you with Mjolnir, material gacha coins, rare swords, multi-sling blueprints, and other rare items.

I have found that his best quest rewards typically require 3 crabs so make sure and try to obtain at least 3 of those to keep on hand at all times.

Also, the big fish tank can have other uses. See this guide to the secret of the Big Fish Tank.

The fishing system in Craftopia can be its own mini-game. The expansion and addition of new fish have really added a lot more to do in the game.