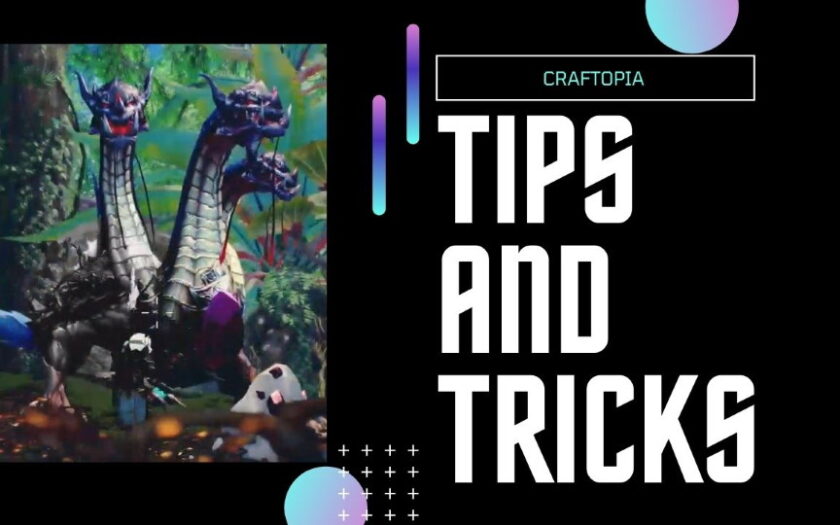 Craftopia is a crafting/survival game that is a mesh of Minecraft, Breath of Wild, and Pokemon. You can craft tanks, build a castle to the sky, or capture dragons. There are a lot of mysteries and features to explore in this game. Here are some tips and tricks that I have learned while playing the game.

When you start the game you will be presented with quests/missions to complete. These start out as simple tasks like crafting a pickaxe or cutting down X number of trees. Don’t neglect these quests when first starting the game. They will offer you great early XP and rewards that can be beneficial.

You also want to complete these quests because they really show you how to get started with the game. The quests guide you into building and crafting items that will help make the game much more enjoyable and allow you to expand your knowledge of Craftopia.

One of the biggest features of Craftopia is that you can automate almost any process. Want to generate a lot of water? Automate it. Want to dig and auto-create ingots. You can do that. Want to automate generating bioethanol? You can do that too.

Using droppers, connecters, absorbers, and auto crafting the most tedious tasks can be automated. There is a lot of grind in this game if you don’t automate. Learn how to do it early and start automating as much as possible.

You can capture and breed almost any animal, enemy, and NPC

Using monster prisms you can catch almost anything in the game and either breed it or tame it to ride on. Those tutorial NPCs you see at the beginning of the game, you can capture and breed the NPCs. If you build a luxury guest table and wait for a guest to arrive. You can capture them and breed them.

Two of the best NPCs in the game to capture are the Trader and Blacksmith. The Blacksmith will give you a slate of growth in exchange for a log. If you capture him first and breed him with another you can have your own Blacksmith farm and gather your max number of Slate of Growth very quickly.

You can capture and breed Traders (Smith). You can capture some high-level Traders breed them and have your own personal trading farm where you can get a good chance of getting rare loot that you can buy from them.

In dungeons, I detailed that there are secret hidden walls that can be destroyed to get more loot. The same can be found on certain islands. If it looks like it might be destructible, go ahead and hit it with a pickaxe and see if something good is hiding there. You can find both chests and dungeons hidden behind walls.

Find treasure chests (use a detector)

Treasure chests can lead to great loot. Whether it is a new sword or some rare ore/ingots you can get some of the game’s best loot by opening treasure chests. Most dungeons have multiple treasure chests located in them, and most islands have several hidden about.

You can also get enchantment points by opening treasure chests. These are useful when you want to put certain enchantments on weapons and armor you create.

Always get the supply pods

Every so many minutes of gameplay you have a random chance of a supply pod or meteorite falling out of the sky on the island you are on. If you look in the distance you will see the burning wreckage laying about and sometimes you will have to swim out to it.

Always go collect these supply pods. They seem to always contain some high-level materials and then have a good random chance of containing gunpowder or saltpeter or high-level food. Plus you can get enchantment points when you open supply pods.

You can restart a new world with the same character

Maybe you started a character but you had no clue what you were doing after a while. Don’t you wish you could start over but keep your stats? Well, you can. When you select an existing character and go to a new world (or create one) you take all your stats and inventory with you. This means you can transfer materials between worlds or just start over and have a higher-level character but a fresh world.

The only caveat here is that your scientific age progress is locked to the world you are in. So if you are starting a new world you have to advance ages again and quests start back over. Also if you got a reward for a quest already you may not get that same reward in the new world.

Advance ages as soon as possible

Advancing ages is pretty easy in Craftopia. The first few have easy requirements. Once you get the Industrial Age advancing further requires some special materials only found on a higher level island.

You want to advance ages quickly so you can build better equipment, weapons, and armor. This will allow you to unlock more islands quickly and have access to fight higher-level enemies and find higher-level treasures.

Collect and keep everything

It won’t take long before your inventory starts filling up with stuff. And you may think that the best route is to just drop it or sell it. Early in the game if you need money to advance ages you might be ok to sell some duplicate weapons. But most materials have enchantments and those enchantments are valuable to building better equipment.

Build storage chests and keep most of your materials. You will find that you will run through supplies quickly as you try to build more and more automations. And as you move to other islands you will find materials needed only spawn on certain islands or are only dropped by certain enemies.

Abandon mines are great for resource collection. They are quite expansive and can contain important materials that just can’t be found in other locations. I have found clay, bauxite, and rare metal in the few abandoned mines I have gone through.

Also, don’t forget to find the end of the mine. There is a boss at the end of the abandoned mine just like a dungeon. You can always go back into the mine and get more materials if you run out of space.

Use the skill tree to your advantage

Each time you level up you will get skill points. You can use these points to unlock skills in the skill tree. There are combat, magic, and trick skill trees. Determine which type of character build you want and spend skill points to maximize your attacks.

There are active and passive skills. So make sure you use the passive skills to your advantage as they don’t require mana and are always helping your character.

Learn how to use your glider

One of the early tutorial quests is to build a glider. The reason for this is the glider is essential to help you move around and keep you healthy. The islands are filled with mountains and valleys and trying to descend without a glider is not an easy task.

Some challenges require (or it’s strongly recommended) a glider. There are some escape trials that if you don’t have a glider you may struggle to get through it.

The cooking pot is a great tool to make some creative food. This isn’t in the game just for show food is essential to your character as you need food to keep your stamina up. But most food also has other bonuses that can increase your health, increase your attack, or increase your mana.

Advanced food can not only fill your satiety but also keep you from dying in battle. Before you take on a boss you may want to take some potato salad or a hot dog. Especially if you haven’t invested in a heal spell.

Watch where you build your home base

Enemies in Craftopia will respawn. When building your home base make sure you build it in a safe location. Try to pick a location that is free from enemies so they won’t come in and destroy your chests or destroy other stations you have crafted.

Craftopia is still a work in progress. But the game can be so much fun if you use the right strategies and tips. There is so much to explore in this game, secrets to be found, and the creators are adding content on a regular basis to keep it interesting.

If you enjoyed these tips and tricks then check out our Youtube channel where we host videos on Craftopia and other games.