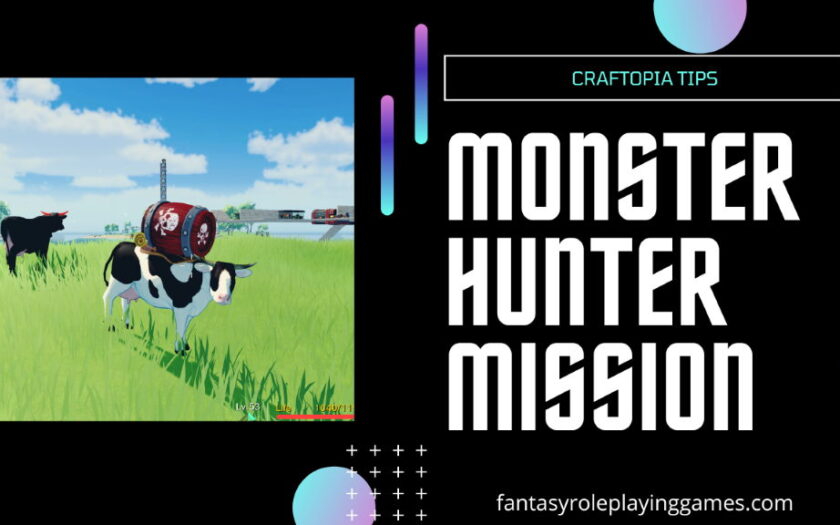 The Monster Hunter Mission in Craftopia has you searching for 5 different kinds of monsters. In this article, I break down why the island of the cove is one of the best locations to help you find all monsters needed to complete the Monster Hunter Mission. One of the hardest things to find is the Stray Mono. And if you have a lower level island and these monsters are not spawning where expected then move to a higher level island. My guide starts on a level 7 island.

On higher-level islands, most of them have stone golems scattered across the map. They look like a large pile of rocks and when you get close to them they will rise up and start attacking you. They do some smash moves and can cause some damage if you don’t kill them quickly.

On the Island of Cove, you can find one heading up the hill and to the right at D3. If you leave the island and come back it should respawn. You can also find one typically in a Royal Tomb as they are in a room just before you get to the boss by themselves.

Defeat 10 Nothing To Lose Cow

I would recommend using a ranged weapon to hit them from afar and explode their barrel to kill them. On the Island of Cove if you head up the hill from the Altar of Transportation toward a goblin camp under Anubis platform they will spawn there almost every time on a higher level island.

The Stray Mono is another mysterious creature. It only spawns at a certain time at specific locations and you must be in the area for them to spawn. But they do spawn on most islands and the Island of Cove is no exception. On the backside of the main island at F2 next to the water they will spawn. This is close to a dungeon so it shouldn’t be too hard to find.

The Stray Mono will only appear when the clock is at 6. In your upper left corner of the game, there is a small clock next to the mini-map. When the hand is straight down at 6 the stray mono can appear. And if you are in the area on a day ending in 7 (7,17,27,37, etc…) an entire horde of stray monos will appear.

If you do damage to stray mono they will also give you enchantment points. But when they spot you they will run away quickly or dig to get away from you. I always recommend sitting up high and then jumping down on top of them to kill them quickly.

Prince monos are the blue monos with a small hat/crown on their head. I usually have two spawn on the island of the cove near the spot the Nothing to Lose cow spawns in just below Anubis’ platform.

You will more than likely have to kill the prince monos from a distance also because if they are around other monos they will combine and form a King Mono. And if you kill the King Mono it doesn’t count towards your goal of 10 Prince Mono.

Defeat 10 Werewolf of the New Moon

The werewolves come out at night or can be found in Royal Tombs. There is also a chance they will spawn in a normal dungeon but if you just wait until nightfall there will be several running around.

Once it gets dark the werewolves will start to spawn and as soon as daylight breaks they will start despawning. But in royal tombs if they spawn once you can keep going back in and defeat them until you get your 10.

I hope this guide helps you find all the locations of the monsters needed to complete the Monster Hunter mission. If you found this useful please consider subscribing to our Youtube channel.